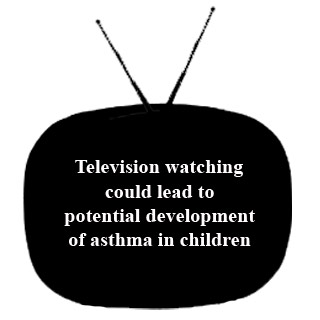 A latest study states that daily watching more than two hours of television could double the risk of the development of asthma in young children.

The amount of time spent watching television was taken as an indication of inactivity. The results revealed that the prevalence of asthma among children at the age of 11.5 years, who had no asthmatic symptoms when they were 3.5 years old, was 6 percent. It was also found that those children who watched television daily for more than two hours had double the risk of developing asthma, as compared to the ones who watched television for a lesser amount of time.

By the time the children were 11.5 years old, it was noticed that the level of sedentary behavior was about the same in both; the ones who had asthma, as well as the ones who didn’t. It is even stated that the study results were not confined to one gender or related to current weight.

The study states that their findings hint at the link between the breathing pattern in children and their sedentary behavior, which may in turn bring about certain developmental changes in the lungs and result in wheezing. They also state that the association between physical activity, sedentary behavior and asthma is quite complicated.

Their findings are published in the journal Thorax.