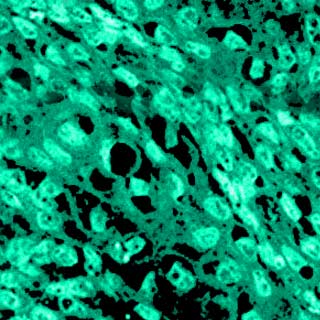 It is believed that scientists at the UNC Lineberger Comprehensive Cancer Center may have found a new angiogenesis protein named SFRP2. Supposedly this protein is known to be a strong stimulator against angiogenesis. Angiogenesis is a process in which tumors need new blood vessels to grow and spread.

One increased factor that causes angiogenesis has been identified as the vascular endothelial growth factor or VEGF. It is to be believed that the drugs taken to delay VEGF are already in use, but in the beginning or even at an extended phase not all tumors react to the treatment. Therefore it may become increasingly important to identify an alternative invention for impeding angiogenesis.

Senior study author Nancy Klauber-DeMore, an associate professor of surgery and a member of UNC Lineberger Comprehensive Cancer Center, says that, “The discovery that SFRP2 stimulates angiogenesis and is present in blood vessels of a wide variety of tumors provides us with a new target for drug design.”

Supposedly, scientists claim that this protein may be a complimentary target for inhibiting angiogenesis. Thereby permitting angiogenesis to “starve” of its blood supply and thus destroying the cancer.

Angiogenesis is said to be found in the blood vessels of numerous tumor sites including breast, prostate, lung, pancreas, ovarian, colon, kidney tumors, and angiosarcomas. This claims to be a highly destructive cancer that begins in the cells lining the blood or lymph vessels. For which alternative therapies are probably limited.

Apparently, scientists successfully used a drug called tacrolimus in order to understand how angiogenesis protein works in the blood vessels. This is often used to prevent organ transplant elimination. Thus it helps in slowing down the growth of angiosarcoma.

This study was published online in the journal Cancer Research.