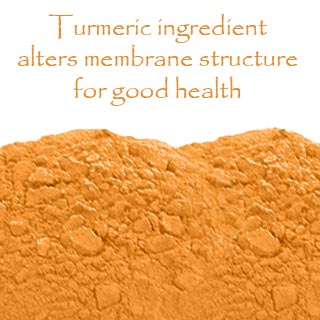 There is a reason behind why your grandmother or other elderly family members usually recommend a paste made out of turmeric to be applied on a dangerous looking wound. Turmeric has long been known to have various healing powers for centuries.

Recent studies have unveiled the healing powers of curcumin, which is the main ingredient of turmeric. However, not much is known about the process through which this magical element of turmeric works in the body. A latest University of Michigan research has now discovered the process in which curcumin works in the body. They discovered the way in which curcumin inserts itself in to the cell membrane, thus making them more organized. This is what enhances the cell’s resistance to malignancy and infection.

Lead researcher, Ayyalusamy Ramamoorthy, a professor of chemistry and biophysics, says that, “The membrane goes from being crazy and floppy to being more disciplined and ordered, so that information flow through it can be controlled.”

This identification was made through the use of a technique called the solid-state NMR spectroscopy. They discovered that curcumin indirectly controls the membrane, by physically bringing about a change in its properties.

In collaboration with other experts, this research team is now in the midst of discovering a range of curcumin derivatives. Ramamoorthy explains, “We want to see how these various derivatives interact with the membrane, to see if the interactions are the same as what we have observed in the current study. Such a comparative study could lead to the development of potent compounds to treat infection and other diseases.”

Researchers are now trying to find out other ways through which curcumin may be of help in fighting against various diseases like Alzheimer’s disease, Parkinson’s disease, Type 2 diabetes, etc.

Their findings are published in the Journal of the American Chemical Society.