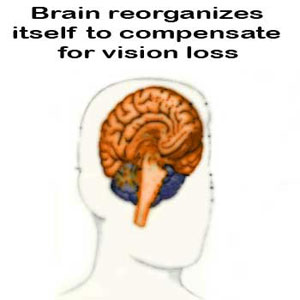 Age-related macular degeneration is the primary cause of blindness in the elderly. A latest study states that when macular degeneration patients use their preferred retinal location; the brain, in order to make up for its loss of central vision, reorganizes its neutral connections.

This study by Georgia Tech was conducted on 13 volunteers. They had to undergo a series of tests which were specially designed to activate the volunteers’ peripheral regions and their brain activity was measured with a functional MRI.

With MRI’s, they found that when patients visually stimulated another part of their retina, an increase in brain activity in the visual cortex was noticed. This increase was noticed in the same parts of the visual cortex that are normally activated when healthy patients focus on objects in their central visual field. Thus they assumed that the brain had accordingly reorganized itself.

Previous research on this particular topic has yielded negative results. Some of the studies recommended that the visual cortex reorganizes itself, however others didn’t agree to it. Schumacher along with other researchers tested whether the patients use of preferred retinal locations, is somehow associated to the reorganization in the visual cortex.

Other studies have revealed that the brain can reorganize itself accordingly. However, this is the first study of its kind to reveal that this reorganization of the brain in patients is linked to patient behavior.

The researchers are currently trying to figure out how long this reorganization takes and also that can it be achieved through low-vision training.

This study appears in the Restorative Neurology and Neuroscience issue. It was funded in part by a seed grant from the Georgia Tech/Emory Health Systems Institute.