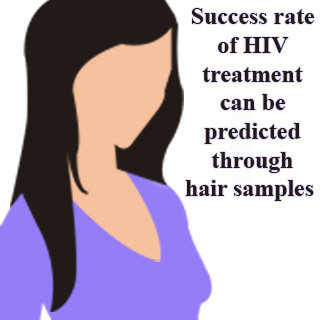 A latest University of California, San Francisco study states that hair samples taken from HIV patients are a strong predicator of the success of the treatment. This could be done by assessing the antiretroviral drugs in the obtained hair samples from the HIV patients.

Presently, clinicians mainly depend on the patients’ self-report, expensive medication dispensing devices or pill counts in order to determine if the patients are taking their prescribed pills as directed. Since it mainly relies on the patients self-report, they haven’t been a very efficient predictor of the success of the treatment. The investigators of the present study state that the level of antiretroviral found in the hair samples of the patients receiving treatments, strongly tallied with the level of the HIV virus in their blood.

“High levels of antiretrovirals in hair correlated with success in HIV viral suppression in treatment and did so better than any of the other variables usually considered to predict response.” says Study investigator, Monica Gandhi, MD, MPH, assistant professor of medicine, Positive Health Program, San Francisco General Hospital, University of California, San Francisco.

The study investigators assessed hair samples from more than 220 patients that were drawn from the Women’s Interagency HIV study, which is an on-going multi-center study of HIV-infected and at risk uninfected women. For the purpose of the present study, investigators took 10 strands of hair samples from the head of these patients. These hair samples were marked and wrapped in aluminum foils which were stored at room temperature in a plastic bag, awaiting its analysis.

Gandhi says that, “This is a painless, bloodless, biohazard-free, method of collecting a stable specimen from HIV patients that may allow for the monitoring of levels of antiretroviral drugs absorbed over time and the prediction of treatment success. Our next step is to test this method in resource-limited settings where blood collection and viral load monitoring may be expensive and difficult. Not only could this method help in measuring pill-taking, but its strong correlation with viral suppression could allow its use as an inexpensive, non-invasive method of monitoring treatment success in particularly challenging settings.”

It is further stated that these study investigators, along with public health researchers are in the midst of testing hair samples to keep a check on pill-taking in high risk HIV negative patients, to prevent HIV infection in them.

Their findings are published in the AIDS issue.