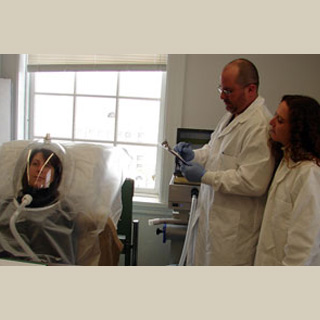 A nutrition professor at the University of Rhode Island has found that chewing sugar-free gum could perhaps assist in lessening calorie intake and increasing energy expenditure.

During the study, approximately 35 male and female subjects were observed to have made two visits to the URI Energy Metabolism Lab after having fasted over night. During one visit, they seemed to have chewed gum for nearly 20 minutes before consuming a breakfast shake and twice more during the three hours before lunch.

Moreover, during both visits, participants were observed to have remained complete motionless since measurements were conducted of their resting metabolism rates and blood glucose levels at regular intervals before and after breakfast and lunch. In addition, the participants appear to have conducted periodic self-assessments of their feelings of hunger, energy and other factors during both visits.

For the purpose of examining the effects of chewing sugar-free gum on weight management, the study professor was believed to have compared gum chewing to non-gum chewing in healthy adult volunteers who came to her lab for nearly two standardized tests in random order.

According to Kathleen Melanson, nerves inside the muscles of the jaw could be stimulated by the motion of chewing. Further, the nerves appear to send signals to the appetite section of the brain that is linked to satiety, which may elucidate why the act of chewing might help to reduce hunger. Additionally, she anticipated that chewing may raise the amount of energy her subjects expended.

“However, what makes the energy expenditure data particularly interesting is that this study simulated real-life gum chewing, with the subjects chewing at their own relaxed, natural pace and for realistic time periods,” says Kathleen Melanson, University of Rhode Island associate professor of nutrition and food sciences.

The findings of the study revealed that when the subjects chewed gum for a total of one hour in the morning i.e. three 20-minute gum-chewing sessions, they seemed to have consumed approximately 67 fewer calories at lunch and did not compensate by eating extra afterwards. Furthermore, male participants appeared to have reported feeling considerably less hungry after chewing gum.

“Based on these results, gum chewing integrates energy expenditure and energy intake, and that’s what energy balance is about,” continues Melanson.

The findings also revealed that when the subjects chewed gum before and after eating, they may have finished about 5 percent more energy as compared to when they did not chew gum. Also, the subjects seem to have stated feeling more energetic after chewing gum.

Melanson claimed that this was a short term study, so the subsequent step may require a longer study and to use subjects who need to lose weight. However, based on these initial results, one could put forward that gum chewing may be a useful addition to a weight management program.

The findings of the study have been presented during the 2007 annual meeting of The Obesity Society.