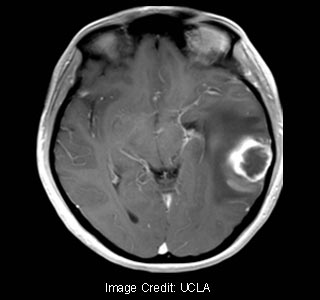 A new technique has been developed by UCLA experts to image brain tumors and predict which of them may be most effectively treated with the Avastin drug. If you thought this was interesting, wait till you read the next line. It seems that this novel technique can undergo these predictions even before the patient has received a single dose of the drug!

The use of the Avastin drug was believed to have been approved for use in the treatment of brain cancer, by the U.S. Food and Drug Administration in May. It was noted that this particular drug seemingly shrinks the tumor by cutting out their blood supply. However this drug does not seem to have the same effect on all the patients, thereby leaving behind various side-effects and unnecessary medication costs.

Lead author, Dr. Whitney Pope, assistant professor of radiological sciences, David Geffen School of Medicine, UCLA, says, “Avastin is an expensive drug, yet only 50 percent of patients with recurring brain cancers respond to it. Until now, there has been no good way to identify these patients in advance. Our work is the first to suggest that we can predict which tumors will respond before the patient ever starts therapy.”

For the purpose of the study, these experts were noted to have mainly focused on glioblastoma, which is considered to be the most fatal and common form of adult brain tumor. This type of tumor has been estimated to annually affect around 12,000 people in the U.S. More so, it was also stated that inspite of undergoing radiation, surgery and chemotherapy a patient suffering from this disease may approximately live for only 12 to 15 months after diagnosis. Apparently, this ratio further drops with the recurrence of the tumor.

In order to better understand this criterion, these experts evaluated more than 80 patients with glioblastoma, who had undergone surgery and radiation. About 50% of these patients were noted to have received Avastin infusions every two weeks. In order to monitor the changes taking place in them, the brains of these patients were notably scanned via MRI. The scans of those patients were believed to have been assessed whose tumors returned. Before the findings of the experts can be explained, it is crucial to understand the process in which the tumor creates an independent blood supply.

Cancer cells presumably secrete the VEGF growth factor, which in turn brings about the development of new blood vessels to provide oxygen and nutrients to the tumor. Now, the Avastin drug notably steps in and curbs VEGF that results in the death of the tumor cells.

This mechanism is believed to trigger a number of factors that may be detectable via MRI scans. Seemingly, the cells which are deprived of oxygen develop more VEGF that causes the blood vessels to leak fluids into the cancerous cells and its neighboring tissue. This in turn brings about a swelling, that further boosts the water’s ability to explore the tumor and surrounding tissue in the brain. As the cells break down, they evidently stop being a hurdle to the movement of the water.

Pope elucidates, “We theorized that tumors with more water motion would also have higher VEGF levels. Because Avastin targets VEGF, it made sense that the drug would work better in tumors with high levels of the growth factor.”

After calculating the amount of water motion in the tumor, the scientists could supposedly predict with 70% accuracy, which of the patients’ tumor would extend within 6 months and which would not. The patients who responded better to the Avastin drug were later found to have more water movement in their tumors.

“When we realized that high levels of VEGF are linked to greater cell death and increased water movement, we were able to predict the patients’ response to Avastin before they began treatment. We were correct 70 percent of the time. Previously, identifying which patients would respond was like flipping a coin. This is a huge improvement,” states Pope.

Having the necessary information beforehand is believed to be of great help in customizing therapies for patients, and reducing their exposure to adverse side-effects. These findings are believed to be assist patients in making better-informative decisions as to continuing with a treatment or to avoid taking anymore of the drug.

These findings have been published in the journal Radiology.