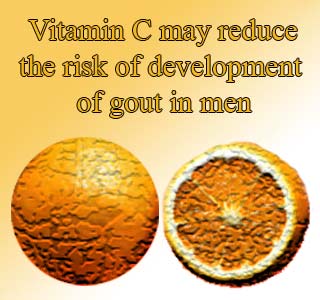 Men with less vitamin C intake may have a higher risk of developing gout, which is a painful type of arthritis. This revelation was made by Hyon K. Choi, M.D., Dr. P.H., presently at the Boston University School of Medicine, and colleagues.

The investigators examined the relationship between gout and vitamin C in about 46,994 men, between the time period of 1986 and 2006. Every four years, the study subjects had to undergo a dietary questionnaire. During this period, their vitamin C intake through food and supplements was also monitored. Participants were asked to report after every two years, whether they had been diagnosed with or had developed the symptoms of gout.

The investigators state that, “Gout is the most common type of inflammatory arthritis in men. Epidemiologic studies suggest that the overall disease burden of gout is substantial and growing. The identification of the risk factors for gout that are modifiable with available measures is an important first step in the prevention and management of this common and excruciatingly painful condition.”

It has also been found that vitamin C may be able to reduce the level of uric acid in the blood. A buildup of this naturally occurring compound can form crystal deposits in and around the joints, which may even lead to swelling, inflammation and pain related to gout. Vitamin C may also influence the re-absorption of uric acid by the kidneys. This could aid in accelerating the rate at which the kidneys protect against inflammation, which could in turn reduce the risk of developing gout.

Their findings were published in the Archives of Internal Medicine, one of the journals of JAMA/Archives.