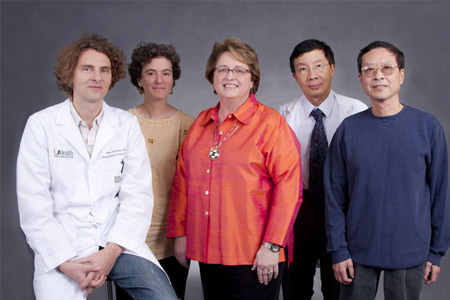 In a tragic tale of 20 years where a family in South Florida couldn’t figure out the cause of their children’s loss of vision, researchers may finally have an answer. A research conducted by geneticists at the University Of Miami Miller School Of Medicine put forth a new gene that apparently causes a form of blindness called retinitis pigmentosa.

The ordeal for the Lidsky children began in their teens when they started to lose their sight and are presently in their 30s now. Their parents underwent many tests for more than 50 pigmentosa retinitis (RP) but failed to find any link until 2010 when scientists found the cause using exome sequencing and zebrafish analyses.

The main aim of the research was gene identification for which the investigators used a new technology known as whole exome sequencing. This technique brings to light the complete coding portions by examining an individual’s genetic material. A certain gene called RP identified in the family for the codes of an enzyme known as dehydrodolichol diphosphate synthase or DHDDS, which is thought to be responsible for the working of a light-sensing protein named rhodopsin.

“This was a powerful demonstration of what we can do with new genetic technologies,” commented Dr. Stephan Züchner, M.D., Ph.D, first author of the paper and director of the Center for Human Molecular Genomics at the Hussman Institute, and Byron Lam, M.D., professor of ophthalmology at Bascom Palmer Eye Institute.

Important evidence to support this gene as the cause of RP comes from the research with zebrafish where it was found that as soon as the scientists blocked the enzyme in the lab the fish became blind. Retinitis pigmentosa is a term used for a large group of diseases that deteriorates the retina of the eye. The retina located at the back of the eye plays a major role in vision by capturing the light that enters the eye which is then converted into images by the brain. In RP the retinal cells that capture light known as cones and rods are likely to be damaged .These cells slowly stop working with time thus degenerating visibility.

The problem of RP seems to first show its effect in the form of night blindness and slow adjustments to dark light. As the problem persists it results in tunnel vision and may lead to complete blindness. Approximately 1 in 3,000 to 4,500 people are known to have RP and is believed to be caused by changes, or mutations, in many genes.

The senior doctors described the treatment for RP an exciting discovery. The investigators state that the DHDDS gene associated with RP could demonstrate the effect of new genetic methodology and would help to find the cause of the condition in small families. They further add that relating to genetics in the process of retinal degeneration could be important as it would help to comprehend almost the complete retinal biology.

This investigation would further help to observe the role of proteins and the process of formation and replacement of light sensitive photoreceptor cells in the retina. This would eventually help to detect the occurring of RP. This would suggest better patient care and development of possible new therapies. While the cure for RP is yet to be discovered, it would help reveal new directions for therapy. According to scientists different angles were yet to be analyzed. The research is being furthered by creating models of zebrafish and skin cells from patients for examination and developing treatments for the same. The testing would take some time.

This research could provide some hope to families that have rare genetic diseases. The research was published online on February 3 in the American Journal of Human Genetics.