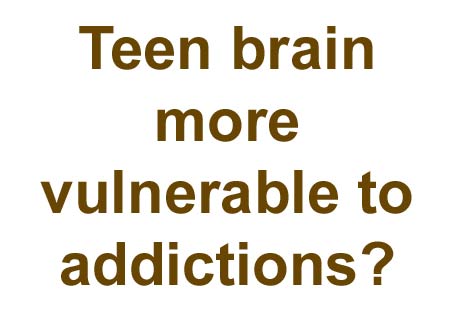 We know that teenagers and adolescents are considered to be the at-risk group, in terms of succumbing to harmful habits. Now, it has been shown scientifically by scientists from the University of Pittsburgh who claim that teenagers are more likely to develop disorders like depression and addiction.

One principal reason for this, as revealed by the team is the increasing responsiveness to rewards in the habit formation centers of the adolescent brain. In this research, brain activities of 2 set of adult and adolescent rodents were observed, as they waited for a reward.

According to the reports, increased activity in the dorsal striatum (DS) of the adolescent rats’ brain was observed. DS is the region responsible for habit formation, motivated learning and decision making. This area, however did not seem to be triggered in the brains of adult rats.

The brain region traditionally associated with reward and motivation, called the nucleus accumbens, was activated similarly in adults and adolescents. But the unique sensitivity of adolescent DS to reward anticipation indicates that, in this age group, reward can tap directly into a brain region that is critical for learning and habit formation,” commented Bita Moghaddam, coauthor of the paper.

Subsequently, the team accessed electrodes to notice precise changes in the adolescent and adult rat brain by a method called brain clamping. They found that age-related neural responses appeared to differ significantly in the DS of the adolescent brain while waiting for a reward.

This implied that reward seeking is processed distinctly in the adolescent brain as compared to adult brain. Moreover, expecting a reward may influence portions of the brain associated with decision-making directly. A better understanding of these processes is essential for designing treatment strategies for teens affected by psychiatric conditions and addictions, the researchers concluded.

The report is published in the journal, Proceedings of the National Academy of Science.