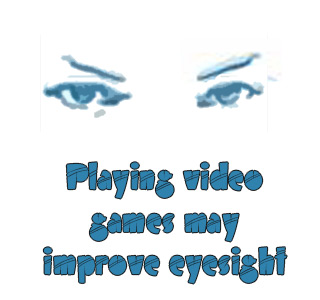 Contrast sensitivity is said to be a complication that globally affects innumerable people. It has been stated that optical changes to the eye, alone may not be enough to account for all the cases of contrast sensitivity function. It is believed that various neutral factors may also have a role to play in this scenario. Thus, various novel approaches may be developed through neural plasticity which may aid in improving the contrast sensitivity function. The development of this new intervention, by acting as a foil for the present interventions, could prove to be very useful in improving the optical quality of the eye.

These findings are said to have been based on the previous work of Daphne Bavelier, professor of brain and cognitive sciences, University of Rochester. She says that action video gaming may help in improving eyesight by training the visual cortex to utilize the received data in a better way. The discovery that action video game playing could act as a strong factor in improving contrast sensitivity function may be a positive step taken forward in the direction of enhancing contrast sensitivity.

To determine whether gaming actually benefited eyesight, the researchers tested the contrast sensitivity function in more than 20 students, which were later divided into two groups. One group was allotted action video games, while the second group was asked to play a richly visual game. The participants were asked to play these respective games for about 50 hours for a period of 9 weeks. At the end of the time period, a 43 percent improvement was noticed in the players playing action games. An improvement was noticed in their ability to detect close shades of gray.

Bavelier says that, “To the best of our knowledge, this is the first demonstration that contrast sensitivity can be improved by simple training. When people play action games, they’re changing the brain’s pathway responsible for visual processing. These games push the human visual system to the limits and the brain adapts to it, and we’ve seen the positive effect remains even two years after the training was over.”

It has been stated that the researchers are now combining their acquired data, with other researchers for the purpose of developing a treatment for amblopia, which is said to be a complication that is brought about by poor transmission of the visual image to the brain.

Their findings are present in the journal Nature Neuroscience.