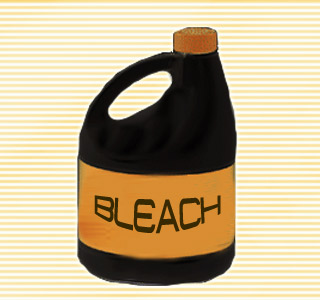 Worldwide, bleach is an agent which is used for whitening laundry. But its positive effects are not merely restricted to whitening a load of laundry. A latest research has stated that bleach may also be useful in the treatment of chronic eczema in children. Who would have thought that the simple household bleach could have this potential curing ability! This research was conducted by the experts from the Northwestern University Feinberg School of Medicine.

Eczema is said to be a skin disorder which can be characterized by an itchy, red skin which due to scratching may become crusty and cracking. This type of skin disorder may have many adverse effects on the quality of life of the affected child. Due to repeated scratching, the affected child could get skin infections which may be difficult to treat, mainly from methicillin-resistant Staphylococcus aureus (MRSA).

The researchers discovered that bathing eczema patients with diluted bleach may noticeably reduce their infection and also improve their level of eczema. Thereby leading to lesser infections and scratching which may in turn hint at a better quality of life for these children.

It has been stated that the patients suffering from eczema are usually treated with oral and topical antibiotics. However, this procedure is believed to increase the possibility of bacterial resistance, which clinicians prefer to mainly avoid in children. The present research pointed out that bleach may have the ability to destroy the bacteria without relatively increasing the risk of bacterial resistance.

In order to verify this, the researchers conducted an analysis on a group of patients suffering from eczema and a bacterial staph infection. These patients were said to have been treated with oral antibiotics. It was stated that few of these subjects received bleach in their bath water, while the rest received a placebo. They were supposedly asked to bathe in bleach twice a week, and soak for about 5-10 minutes for a period of 3 months. Also, all these patients were asked to apply either a topical antibiotic ointment or placebo control into their nose for a particular period of time. A dramatic improvement was said to have been observed in the children who received bleach baths.

Amy S. Paller, MD, professor of pediatrics at the Feinberg School, says that, “The eczema kept getting better and better with the bleach baths and these baths prevented it from flaring again, which is an ongoing problem for these kids. We presume the bleach has antibacterial properties and decreased the number of bacteria on the skin, which is one of the drivers of flares.”

It was noticed that lesions on the body of the eczema patients seemed to have been improved; however no improvement was noticed on their face. This was said to have further strengthened the claim that bleach baths may improve eczema. They have reasoned that since the face was not submerged in the bath no improvement may have been noticed. Therefore, the researchers have notably instructed children with eczema to close their eyes and mouth and dip in the above mentioned water with the aim of improving their rashes.

These findings were published in the Pediatrics journal.