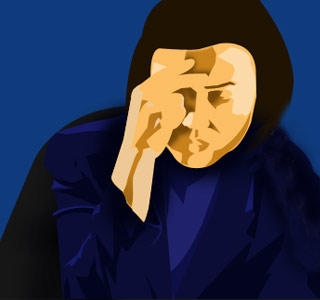 Cancer may usually be accompanied with depression in a patient. Apart from emotionally getting affecting with chemotherapy and other cancer treatments, the tumor itself was also found to lead to an emotional slow-down. An analysis on animal models is believed to have unveiled a biological link between cancer and depression. This study was conducted by the investigators from the University of Chicago.

These experts have noted that tumors may often produce depression-related factors in huge amounts, which in turn may be transmitted to the patient’s brain. It was also observed that the growth of a cancer tumor may interrupt the route which is believed to keep a check on these substances.

Lead author of the paper, Leah Pyter, a postdoctoral fellow, says that, “Our research shows that two types of tumor-induced molecules, one secreted by the immune system and another by the stress axis, may be responsible.”

Pyter further continues by stating that, “Both of these substances have been implicated in depression, but neither has been examined over time frames and magnitudes that are characteristic of chronic diseases such as cancer.”

In order to better evaluate this factor, an analysis was conducted on approximately 100 mice. Few of these rats were stated to suffer from cancer. In order to verify their behavioral state of mind these animals were analyzed.

“Rats are commonly used to test drugs that are being studied for potential human benefits, such as treating depression. In this case, examining behavioral responses to tumors in non-human animals is particularly useful because the rats have no awareness of the disease, and thus their behavioral changes were likely the result of purely biological factors,” elucidates Brian Prendergast, associate professor of psychology, University of Chicago.

It was observed that the mice with cancer tumors seemed to have lesser enthusiasm to avoid undergoing a swimming test. More so they were also found to have a lower appetite for drinking sugary water as compared to their healthy counterparts.

These experts even seemed to have noticed a relatively greater level of cytokines in the blood and hippocampus of the rats with tumors. The immune system is believed to generate cytokines, which have seemingly been associated with depression. In addition to this a decrease in the production of corticosterone stress hormone was also noticed in the rats with cancer. This particular stress hormone is believed to play a role in controlling the cytokines effect. Therefore a lower production of this hormone means boosting the impact of cytokines, which could in turn lead to depression.

This study has been published in the issue of Proceedings of the National Academy of Sciences.