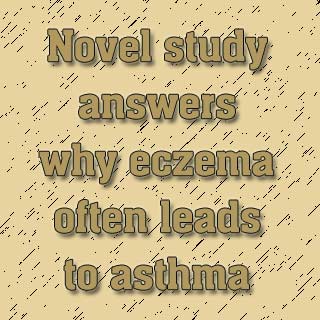 Children suffering from eczema may have a greater likelihood of developing asthma in future. This development from eczema (atopic dermatitis) to breathing complications is been termed as the atopic march by physicians. Recently the cause for this atopic march was revealed. It is believed that a substance secreted by the damaged skin may trigger the development of asthma. This discovery was made by the scientists from the Washington University School of Medicine, St. Louis.

It was estimated that about 50-70 percent of children suffering from severe atopic dermatitis later also develop asthma. However, comparatively the rate of common people acquiring asthma is believed to be merely 9 percent in children. These scientists imply that early treatment of eczema and the blocking of the secreting substance may in turn curb the development of asthma in young eczema patients.

Study author, Raphael Kopan, PhD, professor of developmental biology and of dermatology, says that, “Over the years, the clinical community has struggled to explain atopic march. So when we found that the skin of mice with an eczema-like condition produced a substance previously implicated in asthma, we decided to investigate further. We found that the mice also suffered from asthma-like responses to inhaled allergens, implicating the substance, called TSLP, as the link between eczema and asthma.”

TSLP (thymic stromal lymphopoietin) is said to be the substance which gets secreted by the damaged skin. This is said to be a compound which may be able to bring about a strong immune response. By spreading throughout the body, this substance is believed to reach the lungs, where it results in asthma.

Kopan says that, “We are excited because we’ve narrowed down the problem of atopic march to one molecule. We’ve shown that skin can act as a signaling organ and drive allergic inflammation in the lung by releasing TSLP. Now it will be important to address how to prevent defective skin from producing TSLP. If that can be done, the link between eczema and asthma could be broken.”

A study on mice apparently demonstrated this entire procedure. Not only this, it was also stated that if mice with normal skin were genetically manipulated to produce excess TSLP, they also seemed to develop symptoms akin to asthma.

These experts have concluded by saying that if human studies also yield similar results then these findings could lead to the development of novel techniques for either preventing or treating asthma in patients.

This study appears in Public Library of Science Biology.