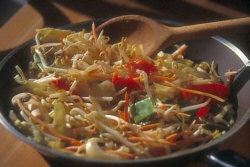 The risk of Lung Cancer can be augmented further if one resorts to stir-fry cooking sans proper ventilation, stated a review published in a specialist journal, Lancet Oncology.

A study conducted in Hong Kong, two studies in Shanghai and one in Gansu province discovered that moderate or high frequency stir-frying, as well as deep-frying and pan-frying, were linked with a significant increase in lung cancers, it says.

The frying method and type of oil used seem to make no difference to the risk, it says.

The report reads, Emissions from high-temperature frying “(are) probably carcinogenic to humans.”

The authors of the review are a working group of the World Health Organization’s International Agency for Research on Cancer (IARC).

The paper says its conclusion is based on sound evidence from lab animals but acknowledges that research on humans is so far limited.

The three Chinese studies may have had “confounding factors” as some cooks also used solid cooking fuels, it notes.

The report says inadequately-ventilated burning of coal in households is a cancer risk, due to fine particles and carbon-based volatile gases in the fumes.

Wood-burning in poor ventilation is also “probably” carcinogenic, it says.

Almost half of the world’s population use coal or wood for cooking or heating.