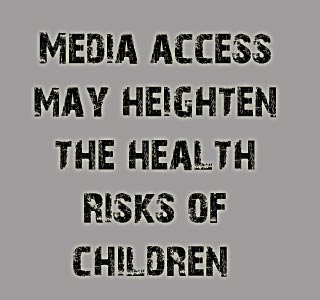 Now-a-days due to easier access to the media, many youngsters may fall prey to a number of negative effects that such an exposure may have. Additional exposure to the media and other content may have potential negative effects like drugs, obesity, sex, eating disorders, etc. Therefore children’s easy access to the media is believed to be monitored and if possible even limited. This study was presented by Victor C. Strasburger, MD, of the University of New Mexico School of Medicine, Albuquerque.

It was stated that adolescents and children approximately spend more than 6 hours everyday with the media. The time that they spend with media is believed to be even more than the amount of time they spend in formal classroom instruction. More so a wide variety of young adults in the U.S. are believed to have unprecedented access to the media through private TV sets in their rooms, Computer or Internet access, or VCR or a DVD player.

Dr. Strasburger says that, “The media are not the leading cause of any pediatric health problem in the United States, but they do make a substantial contribution to many health problems, including the following.”

It was stated that drugs, violence, obesity, sex and eating disorders may be some of the health issues to which youngsters may be exposed through the media. Therefore in order to reduce the adverse effects of such an exposure, it is believed that promoting network contraceptive advertising may be helpful. Apart from this it is also noted that legislation could possibly be passed which could ban or limit cigarette and alcohol advertising in all media to advertisements which merely show the product.

It was suggested that, “Parents have to change the way their children access the media—not permitting TV sets or Internet connections in the child’s bedroom, limiting entertainment screen time to less than 2 hours per day, and co-viewing with their children and adolescents. Research has shown that media effects are magnified significantly when there is a TV set in the child’s or adolescent’s bedroom.”

On the other hand, it was also believed that media could also have a very strong positive effect on youngsters. These experts stated that, “Antiviolence attitudes, empathy, cooperation, tolerance toward individuals of other races and ethnicities, respect for older people—the media can be powerfully prosocial.”

The media is believed to be very useful in educating children as well as adolescents. However the only criterion that is to be considered is what are the children learning and how could that be possibly changed. Evidently when there is an added exposure to the media, additional attention may need to be provided to be wary of the effects of media on children.