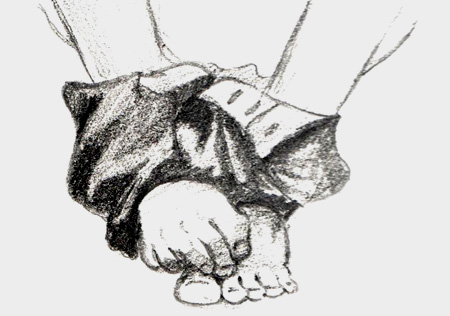 ‘Mr. T. Patterson Frisby was a little man who looked as if he had been constructed of industrial grade leather. His expression was one of acute exasperation. The fact that he had been expecting these pangs did nothing to mitigate them. Indeed, it added to the physical anguish a spiritual remorse which was almost as unpleasant. A whole medical college of doctors had told Mr. Frisby to avoid roast duck, and as a rule he was strong enough to do so. But last night the craving had been too much for him. He had wallowed madly and recklessly in roast duck, tucking into the stuffing like a farm-hand. Today had come the inevitable retribution.

He took a pepsin tablet from the bottle on the desk and tossed it into his mouth – not in the gay, dashing manner of some monarch flinging freebies to the crowd, but sullenly, with the air of one reluctantly compelled to lend money to a persistent borrower. His gastric juices, he knew, would give him no peace until they had had the stuff, so he gave it to them.’ This is just an extract from P. G. Wodehouse’s novel Big Money published in 1931

Though the travails of human life have been a constant source of inspiration and reflection for communicators, there is something inherently funny about gastric problems. There are many words we commonly use and misuse to describe these annoying commonplace irritations. One such term is constipation. Like indigestion, it is used for describing convoluted looks on the faces of people pre-disposed to providing comic relief as in the eloquent example at the beginning of this article. But there is nothing funny about constipation when it is persistent. In everyday parlance, we use this word to describe any occurrence that is undesirable during the transit of food in the body. But as definitions of constipation have broadened, it is being taken more seriously.

What then, would be a workable definition?

If you ‘google’ it, difficulty or straining to pass stools will turn up very often. Abdominal discomfort is another term that you will come across. These terms are vague and subjective and are applicable to a host of gastric problems. Hence, a workable definition should be passage of stools only 3 times or less in a week. So, passage of stools every alternate day is normal, less frequent than that should be considered as constipation. Like other conditions, constipation can also be acute and chronic. Acute constipation is experienced by everyone at some point of time and occurs due to transient changes in diet and routine such as while travelling. It can also occur due to stress. Bowel movement 3 times or less in a week for more than 3 months should be looked into. If this frequency of bowel movements persists for more than 6 months, one should definitely consult a doctor, preferably, a gastroenterologist. Another pitfall here is the fact that often, constipation is not a condition in itself but a symptom of an underlying cause.

The incidence of constipation is over 10% worldwide and over 15% in India. What is the definition employed in surveys about incidence makes a difference. But at any rate, the figures are high. Constipation occurs more commonly among females suggesting hormonal causes. It is very common during pregnancy due to the womb pushing against the intestine and medications such as iron supplements. It is common in juvenile and geriatric groups. Colonic and pelvic muscles weaken with age. This coupled with low physical activity, decreasing dietary intake and medicines lead to high incidence of constipation among geriatrics. Incidence is increasing in adults too due to increasing consumption of processed food and a busy yet sedentary lifestyle. Conditions such as diabetes, hypothyroidism, Parkinson’s and sclerosis also predispose to constipation.

The most common causes of constipation are lack of fiber* in diet, inadequate consumption of water and sedentary lifestyle. Correction of these 3 factors is easy and can readily reverse the condition. This along with constipation caused by weakness or sluggishness of colonic or pelvic floor muscles is termed as functional constipation. This can be treated relatively easily. For the uninitiated, dietary fiber is that part of food that cannot be digested by the body and hence passes as stool. Fiber adds bulk and makes the texture of stools softer making it easy to pass. At least 20 grams of fiber should be consumed in a day. Although Indians usually consume a high fiber diet due to presence of pulses and rice and wheat, urban lifestyles lead to a higher consumption of processed foods. Under normal conditions, the colon absorbs nutrients and water from food. The hard bulky leftovers are passed as stools. Constipation occurs when excess water is absorbed and the stools are too dry and hard to pass comfortably. Hence, an increased fluid intake is believed to help ease bowel movements.

The intestine has a huge number of serotonin receptors and is known to be very sensitive to changes in mood. Anorexia nervosa is another condition that can lead to constipation as the intake of food decreases drastically coupled with a general state of depression. Constipation is also a common side effect of drugs such as pain-killers, muscle relaxants, anti-hypertensives, antidepressants and; somewhat ironically, antacids. Again, withdrawal of these medications will relieve constipation. Idiopathic constipation is that of unknown origin, i.e. it does not respond to standard measures such as those just mentioned. 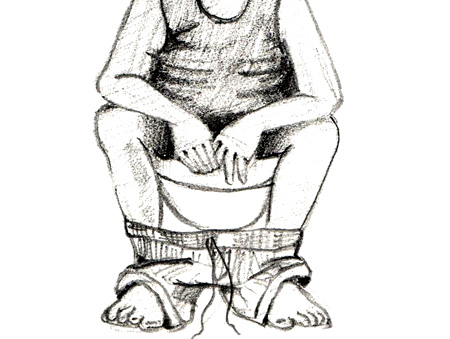 Constipation, like any other complication should be approached in levels of simplicity. The most common causes are also the easiest to treat. Increasing intake of dietary fiber and fluids along with exercise are thus the first line of treatment. Foods rich in fiber include fruits, vegetables, cereals, whole wheat bread etc. One should avoid foods low in fiber such as milk and milk products. Also to be avoided are beverages such as coffee, aerated soft drinks and alcohol. This is because these beverages cause de-hydration which leads to constipation or worsens already existing constipation. Though the link between exercise and bowel movement is not completely understood, increased metabolic rate, burning of excess calories and improved muscle tone would definitely help digestion. Many readers may at this point be sighing, ‘Not diet and exercise again!’ So, here is a look at the options:

Stool Softeners – These are drugs that increase fluid content in stools thus enabling easier passage. These are indicated for elderly, senile patients and also for patients of heart ailments. Straining during bowel movements is to be strictly avoided by such patients. An example is Docusate.

Laxatives – These are husks of plants, i.e. fiber that is not being consumed in diet is supplemented. Though tedious to consume, this is the simplest and safest option for people who find it hard to increase fiber intake in their diet and besides it is also effective. Bulk laxatives include Psyllium, ispaghula, wheat dextrin and more. Methyl cellulose, calcium polycarbophil are fibers that are available in convenient tablet and powder forms. These swell up once they enter the intestine and facilitate bowel movement.

Stimulant Laxatives – These are commonly known as irritants and purgatives. In simple terms, these agents stimulate the intestine into action. It is a quick, effective but a rather crude way of treating constipation. Senna leaves are the active ingredient in over-the-counter ‘herbal remedies’. Bisocodyl is also an example.

Osmotic laxatives – Magnesium containing laxatives (Milk of Magnesia), PEG (polyethylene glycol) and non-absorbable sugars such as lactulose and sorbitol come under this category. These are called osmotic laxatives as they cause fluid to accumulate in the intestine. Common side effects are bloating and diarrhea. Dosage, therefore, needs to be titrated by the doctor to fit individual patient needs.

Newer Drugs such as Tegaserod and Lubiprostone are novel in their mode of action and hold promise. Though effective to varying degrees, none of these drugs are considered safe for long term treatment, especially during pregnancy.

Behavioral Therapy – There is widespread agreement that long term use of laxatives leads to dependence, i.e. bowel muscles get used to working with stimulation that the laxatives provide. Psychology then, plays a part in bowel movements. In an initial examination, the physician tries to diagnose based on medical history and a primary physical examination. In many cases, the patient has a misconception about bowel movements. Eg: The 3 days a week thumb rule laid out at the beginning of the feature. Behavioral therapy, as we have observed in previous features such as the one on insomnia, is gaining increasing acceptance in medicine.

For treating constipation, behavioral therapy finds application in the form of biofeedback. Patients are told to try to evacuate their bowels while mechanical sensors indicate which muscles are being used. Many a times, constipation occurs due to inappropriate muscle contraction. So, one would have to re-learn how to do it! But at least, no medicines are required and the effects are long lasting.

As the disease is not one that would raise immediate alarm, one does not think of seeing a doctor instantly. As common place as the disease is, the fact that a plethora of OTC options are available is not surprising. People try this stuff for years before finally giving up and consulting a doctor. In the mean while they develop a psychological dependence on these ‘drugs’ while their under-lying condition is getting aggravated. If anything, the case only reaches the family practitioner who after long and unsuccessful attempts refers the case to a gastroenterologist. The reason why this should be avoided is that under lying chronic cases of constipation could be serious conditions such as Irritable Bowel Syndrome (IBS), polyps or other obstructions to bowel movement or even malignancies. These are very difficult to treat. Surgery, which is reserved as the last option does not have a good success rate.

If you are still reading and grimacing about the diet and exercise thing, here are a few more reasons why you should take option A. When a patient does not respond to conventional therapy, i.e. in a case of idiopathic constipation a host of tests have to be performed to rule out serious illnesses like auto-immune disorders and cancer. Considering the nature of the disease, one can only imagine what the diagnostic test would be like. To say that hearing the snap of rubber gloves tightly fitted on an examiner’s hand while lying face down on the examination table is a traumatic experience in itself would not be untrue. Would diet and exercise not seem agreeable options at that stage?

In rare cases, constipation is so debilitating that patients cannot move out of the house. But even in normal cases, it is a bothersome condition that interferes with day-to-day activities. Apart from bowel movement itself, it affects food habits and daily routines while nutrition also suffers. To think all this can be avoided by simply cultivating habits such as taking a sip of water every half an hour and climbing the stairs instead of the lift leaves one wondering why we don’t do it.

Here are some memorable excuses I have heard first hand:

In a country like ours, a mortal fear of public toilets is understandable. But if you have nodded while reading any of the above excuses, just think of the snap of the rubber glove.