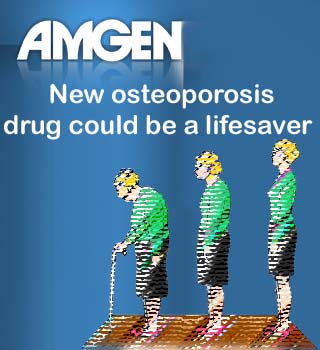 A new drug promises to bring relief to the millions who suffer from osteoporosis. The brittle bone drug, Denosumab is a revolutionary and cheap new medication that has significantly helped in easing the symptoms of people with osteoporosis. Following successful trials, the transforming drug is expected to sell in the UK within two years.

Richard Eastell, professor of bone metabolism at Sheffield University, who led one of the British groups contributing to the Denosumab study, revealed, “There are some treatments available and there is no doubt more people should be on them, but this drug really would be a big help to us. We would like to find something that actually prevents osteoporosis. This might be the drug.”

A spokesman for the National Osteoporosis Society additionally welcomed the new treatment. He cautiously mentioned, “This drug is not yet licensed for use, but when available, it will add to the choice of drug treatments available for people at risk of breaking a bone because of osteoporosis,” a spokesman for the charity said. However, patient safety is paramount and, as with any new drug to market, risks and side effects will need to be fully assessed.”

The international trials of the drug are being conducted by a Californian biotechnology company Amgen, also the developers of the drug. They suggest that Denosumab helped bones to regrow, halved the number of hip fractures and reduced spine fractures by almost two-thirds in the 8,000 postmenopausal women it was tested on.

Research on the drug implicates that women can regain 40% of bone density by having an injection every six months. The process is expected to be cheaper, easier to administer and with fewer side-effects than existing medicines.

Scientists reveal that the revolutionary drug is one of a new generation of drugs called targeted monoclonal antibody treatments. It works by stimulating a patient’s immune systems to block a protein called RANK ligand. The specific protein is known to trigger the breakdown of bone strength in sufferers. Though bone cells are regenerated in pretty much the same way as skin cells, the mechanism seems to fail in 50% middle-aged women and one in five older men.

Developed over a period of 10 years by Amgen, the findings on Denosumab will be presented at the 30th annual meeting of the American Society for Bone and Mineral Research in Montreal. At an estimated price of £50-£80 a year, the drug has the potential to save the National Health Service hundreds of millions of pounds.

Researchers suggest that women may thus be protected by therapies like Denosumab.