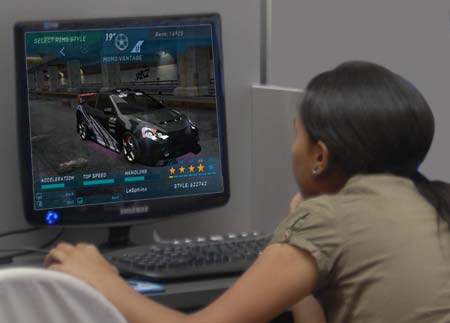 Hardly a few people may not enjoy indulging in an occasional computer or console game. However if such an indulgence may take the form of an addiction then it may prove to be harmful for the gamer.

A latest study has stated that people playing such games for more than 7 hours a week may relatively sleep lesser during the weekdays and also experience greater sleepiness as compared to non-gamers or people who are casual players. This study is believed to have directly linked sleepiness with the number of hours of game play.

An earlier evaluation was believed to have revealed that people excessively playing games seem to be sleeping lesser, in addition to having longer sleep latency and shorter REM latency.

Lead investigator, Amanda Woolems, University of Arkansas, Little Rock, AR, says that, “Our statistics revealed that those who admitted addiction scored higher on the Epworth Sleepiness Scale (sleepiness). It surprised us, however, that of the people who admitted being addicted to gaming, only about a third of them recognized an interference with their sleep.”

For the study, these experts analyzed the data derived from 137 university students. These students were stated to have a mean age of about 22 years. Based on certain questionnaires all of these subjects were evidently categorized as either excessive or casual gamers. About 10.81% of these subjects were stated to have reported interference in their sleep due to gaming, while 12.6% claimed to be addicted to gaming.

The American Academy of Sleep Medicine is stated to have suggested adults and adolescents to get 8 hours and 9 hours of sleep respectively, per night. Apart from this, people with suspecting sleep disorder symptoms have been encouraged to consult an expert in the field.

These findings were presented at SLEEP 2009, the 23rd Annual Meeting of the Associated Professional Sleep Societies.