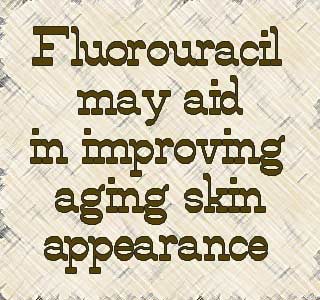 Apart from destroying cancerous tumor cells, a chemotherapy drug was also found to be capable of reducing suspected precancerous patches on the skin and also enhance the appearance of skin damaged by the sun rays. This intriguing discovery was made by Dana L. Sachs, MD, an associate professor of dermatology in the University of Michigan, along with her colleagues.

It was stated that the chemotherapy drug, fluorouracil may be used for the treatment of various cancers including those of the pancreas, head and neck, colon etc. among others. This particular drug was stated to be capable of preventing the body from synthesizing thymine, which is presumably a building block of DNA.

Experts were believed to have witnessed improvements in the skin appearance of cancer patients who were treated with fluorouracil. This was stated to have initiated the development of a topical therapy that may be beneficial in treating potentially precancerous skin patches.

In order to assess this criterion, the study investigators were stated to have analyzed about 21 healthy participants with lesions on their skin or sun-damaged skin. These participants were evidently asked to apply 5 percent fluorouracil cream on their face twice daily for a period of about two weeks.

Allegedly skin biopsies and clinical evaluations were performed on the subjects at the start of the treatment as well as periodically throughout the treatment. More so, even photographs of the participants were believed to have been clicked at the commencement as well as during the course of the entire treatment. These photographs were in turn believed to have been analyzed and evaluated by about 3 dermatologists who were evidently not a part of the examination of the patients during the study.

A reduction in the number of skin lesions was stated to have been observed after the treatment. The number of lesions were believed to have been reduced from an average of 11.6 lesions to about 1.5. More over an over all improvement was also found in age-related damage incurred on the skin like dark spots, wrinkling, sallowness (yellow skin tone) or even hyperpigmentation (darkening of skin).

It was further noted that over all the treatment seemed to be well-tolerated by the participants. In a questionnaire towards the end of the study, about 95% of the participants were believed to have rated their skin as improved, while about 89% were evidently ready to again undergo this treatment.

These findings were published in one of the journals of JAMA/ Archives, called the Archives of Dermatology.