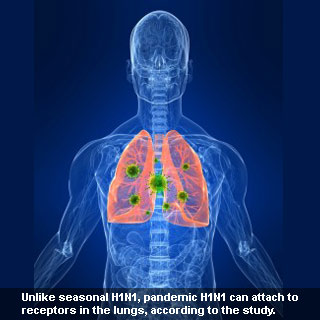 Pandemic flu takes place when a new influenza A virus appears for which there is little or no immunity in the human population. It may start to cause grave illness and then spread easily from person-to-person worldwide. Based on pandemic flu, a new research from Imperial College London claims that pandemic swine flu may contaminate cells deeper in the lungs than seasonal flu.

This may clarify why people infected with the pandemic strain of swine-origin H1N1 influenza may have more tendencies to undergo more intense symptoms than those infected with the seasonal strain of H1N1. It is also recommended that scientists ought to observe the present pandemic H1N1 influenza virus for changes in the way it apparently infects cells that may make the infections more critical.

Influenza viruses infect cells by joining to bead-like molecules on the outside of the cell known as receptors. Different viruses may fasten to diverse receptors. If a virus cannot find its definite receptors, it supposedly cannot enter the cell. Once inside the cell, the virus may employ the cell’s machinery to apparently make thousand more viruses, which then apparently rips off the cell and contaminates adjacent ones, thereby creating an infection.

Seasonal influenza viruses apparently connect to receptors on cells in the nose, throat and upper airway, thus allowing them to infect a person’s respiratory tract. The study shows that pandemic H1N1 swine flu may also attach to a receptor on cells deep inside the lungs, which may lead to severe lung infection.

Professor Ten Feizi, a corresponding author of today’s paper from the Division of Medicine at Imperial College London, commented, “Most people infected with swine-origin flu in the current pandemic have experienced relatively mild symptoms. However, some people have had more severe lung infections, which can be worse than those caused by seasonal flu. Our new research shows how the virus does this – by attaching to receptors mostly found on cells deep in the lungs. This is something seasonal flu cannot do.”

The researchers discovered that pandemic H1N1 influenza may bind more weakly to the receptors in the lungs compared to those in the upper respiratory tract. This is why mild symptoms may be experienced by nearly everyone infected with the virus. Nevertheless, they are anxious that the virus could alter to attach more powerfully to these receptors.

Professor Feizi, mentioned, “The researchers found that pandemic H1N1 influenza bound more weakly to the receptors in the lungs than to those in the upper respiratory tract. This is why most people infected with the virus have experienced mild symptoms. However, the researchers are concerned that the virus could mutate to bind more strongly to these receptors.”

The researchers apparently evaluated the way seasonal and pandemic H1N1 flu viruses may infect cells by spotting which receptors each virus attaches to. To carry out this, a glass surface with about 86 different receptors attached to it, known as carbohydrate microarray was used. When viruses were apparently added to the glass surface, they stuck to their particular receptors and the equivalent regions on the plate supposedly ‘lit up’. This may mean that the experts could observe which receptors the different viruses attached to.

Professor Feizi mentioned that the receptor binding determines how well a virus spreads between cells and causes an infection. His new study adds to his understanding of how swine-origin influenza H1N1 virus is behaving in the current pandemic, and shows them changes they need to look out for.

This study was published in Nature Biotechnology.