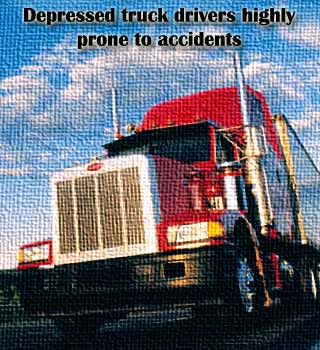 Depression and driving…what’s the link? It may sound weird to you but the two are actually associated. Research by Queensland University reveals that depression or casual employment among truck drivers can greatly up the chances of accidents. Based on the mental health of drivers, the study urges depressed truckies to beat the blues.

Supported by various government bodies including the National Transport Commission (NTC), the distinct study shows that drivers of heavy vehicles worked 62 hours every week. Nearly 65% of them work longer with some putting in more than 100 hours per week.

Michael Hilton of Park Centre for Mental Health in Queensland, author of the study, mentioned, “Educating those in the transport sector about mental health issues and reducing the stigma attached to help-seeking is important. The findings also point to the need to address the causes of stress in HGV drivers and reduce working hours. Our research found that 91 percent of drivers with symptoms of depression were not in treatment – we also found that drivers have substantial barriers to treatment for mental health problems”

“The new ‘Chain of Responsibility’ laws which address the underlying causes of heavy vehicle driver fatigue, such as poor planned rest breaks and impossible deadlines, are a step in the right direction to improve working conditions,” added NTC senior manager (safety), Jeff Potter.

Researchers have found that those drivers who had symptoms of depression were twice more likely to cause accidents. Additionally, individuals suffering from severe bouts of depression were six times more prone to accidents. The study interestingly discovered that nearly 27% of drivers were potentially hazardous users of alcohol with 3% in the extreme risk category. Use of drugs among heavy truck drivers was nearly double that of the normal population with nearly 9% of drivers using a drug weekly.

The odds of depression are increased by nearly five times for those who are divorced.

Though the NTC has strict implications for road safety, researchers find that the drivers themselves resist to treatment. The findings of this research need serious implementation and truckies need to be screened for mental health problems.