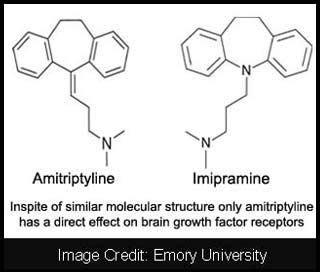 According to a team of researchers, a well known drug used for pain and depression may have the ability to mimic the brain’s own growth factors. Researchers from the Emory University School of Medicine have evidently demonstrated this capability of the amitriptyline drug.

Amitriptyline is stated to be a drug used as an antidepressant and pain medication. Like other tricyclic antidepressants, even this drug is presumed to take its toll on the body by elevating the levels of serotonin and nonrepinephrine in the brain.

However the amount of time consumed for this effect to take place is believed to have led experts to hypothesize that a secondary effect may also be taking place indirectly. There may be some factor at work which may be responsible for pushing the neurons to endure and develop.

A different process is being presumed to take place after the discovery, that the above mentioned specific drug may have the ability to influence the molecules which are believed to aid the neurons to grow and evade toxins. Thus, indicating that through this process some antidepressant and pain relief compounds may function and carry on with their activities.

The experts from the presently conducted research were believed to be in search of chemicals which could seemingly mimic the nerve growth factor (NGF) protein in the brain. This particular protein is believed to have been tested for use in patients with Alzheimer’s disease and diabetes-related nerve degeneration. Conversely this protein is presumed to lack the ability of crossing the blood-brain barrier. More so it has also allegedly also confused the experts with its adverse effects which include greater sensitivity to pain.

Supposedly, these experts have gone through an array of chemicals to uncover the ones which could have an effect on one of the “receiver dish” molecules of NGF on the TrkA nerve cells. Notably by getting two Trka molecules together on the surface of the cell, the NGF is believed to function.

Following this, Keqiang Ye, associate professor of pathology and laboratory medicine at the Emory University School of Medicine, says that, “We were surprised to find that amitriptyline has these same properties. This is an antidepressant that has been used for decades.”

It was evidently noted that only amitriptyline had the potential of replicating the NGF function of influencing the neurons to start connecting with the other neurons. Apart from this, it was also found that amitriptyline may also have the ability to do something which was evidently not witnessed before. It seemed to bring together different pairs of TrkA and TrkB. In contrast to this, the other tricyclic antidepressants didn’t seem to have the same ability of following in the steps of amitriptyline. Even the imipramine antidepressant which had the same molecular structure didn’t seem to match the ability of amitriptyline to stimulate the cells through TrkA.

This research has been published online before print. They are also believed to soon be published in print in the Chemistry & Biology journal.