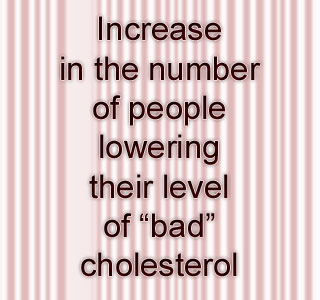 According to a latest report, there has been a 50% rise in the number of patients who may have lowered their level of “bad” cholesterol over the past 10 years. This intriguing revelation was made by the experts through the Lipid Treatment Assessment Project (L-TAP) 2 survey.

This survey was stated to have been conducted on almost 10,000 patients from about 9 countries, who were believed to be undergoing cholesterol-lowering and management efforts. The average age of these participants was stated to be about 62 years. Low-density lipoprotein (LDL) is believed to be “bad” cholesterol because of its potential link with accelerated cardiovascular risk.

It was noted that over the last decade, the number of patients who seemed to have lowered their level of LDL seemed to have elevated from 38% to a whopping 73%. It was also noted that only about 30 percent of the patients belonging to the high risk group were stated to have achieved their LDL target of about 70 milligrams per deciliter (mg/dL) or less.

Study lead author, David D. Waters, MD, Emeritus Professor, University of California, San Francisco, says that, “Although there is room for improvement, particularly in very high-risk patients, these results indicate that lipid-lowering therapy is being applied much more successfully than it was a decade ago.”

Evidently, around 75 percent of the surveyed patients were believed to be on statin drugs; whereas the rest of the patients may have been treated with ezetimbe, fibrates or lifestyle changes which included dieting and exercise.

The experts have further stated that the ratio of patients reaching their LDL target equivalent to the ratio recommended by the national guidelines seemed to about 47% in Spain to about 84% in South Korea. This difference in the ratio could evidently not be explained by the experts.

This study was reported in Circulation: Journal of the American Heart Association.