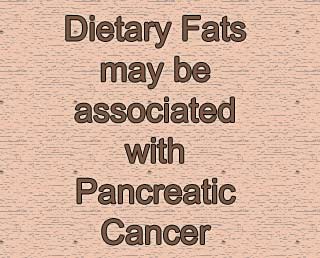 People who indulge in excessive intake of dietary fats from dairy products and red meat were believed to be at a greater risk of experiencing pancreatic cancer. This claim was believed to have been made by a recent study conducted by Rachael Z. Stolzenberg-Solomon, Ph.D., of the Division of Cancer Epidemiology and Genetics at the National Cancer Institute in Bethesda, and colleagues.

Together these experts were noted to have assessed a huge group of people from the National Institutes of Health – AARP Diet and Health Study. The study subjects apparently were asked to fill out a food frequency questionnaire, and were also tracked for a period of about 6 years. These subjects were followed for this time frame in order to check on their range of health outcomes, inclusive of pancreatic cancer.

The study investigators have stated that, “We observed positive associations between pancreatic cancer and intakes of total, saturated, and monounsaturated fat overall, particularly from red meat and dairy food sources. We did not observe any consistent association with polyunsaturated or fat from plant food sources. Altogether, these results suggest a role for animal fat in pancreatic carcinogenesis.”

Evidently this study was conducted to solve the mystery revolving around the potential link between fat intake and pancreatic cancer.

Brian M. Wolpin, M.D., MPH, of the Dana Farber Cancer Institute in Boston and Meir J. Stampfer, M.D., DrPH, of the Harvard School of Public Health, in an associated editorial called the above study a well-performed and a good addition to the understanding of pancreatic cancer.

Having said this, they have also noted that there didn’t seem to be enough proof to determine the role played by animal fats, or even to verify that meat may be a crucial factor, as against to the dietary or behavioral changes linked with meat consumption.

It was further stated that following further investigation these findings may possibly be useful in understanding the underlying mechanisms of pancreatic tumorigenesis.

This study was published online in the Journal of the National Cancer Institute.