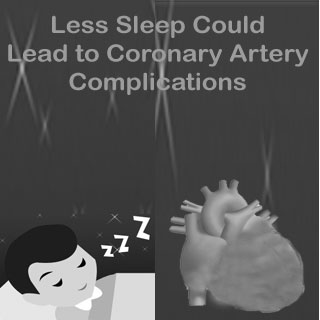 A recent study states that sleeping for one extra hour every night may possibly reduce the risk of coronary artery calcification. This is the onset of developing cardiovascular disease.

This study was conducted by the researchers at the University of Chicago Medical Center. Apparently the benefit of an extra hour of sleep was compared to the benefit obtained from reducing systolic blood pressure by 17 mm Hg. This is evidently the first study of its kind to have linked objectively measured sleep duration to a pre-clinical marker for heart disease.

Apparently more than 400 participants in the Coronary Artery Risk Development in Young Adults (CARDIA) were studied. It’s stated that an estimated 12 percent of the participants developed coronary artery calcification over a period of five years of follow up. Calcified arteries were believed to be found in around 27 percent of these volunteers who apparently slept for less than five hours a night. The ratio dropped by 11 percent for the volunteers who slept for around five to seven hours. On the other hand, the ratio dropped even further for the volunteers who reported more than seven hours of sleep. Most of the volunteers were said to be in their 40s.

Study director, Diane Lauderdale, PhD, associate professor of health studies, University of Chicago Medical Center, says that, “The consistency and the magnitude of the difference came as a surprise. It’s also something of a mystery. We can only speculate about why those with shorter average sleep duration were more likely to develop calcification of the coronary arteries.”

Evidently earlier studies have highlighted the benefit of sleeping, and even hinted at the development of various medical complications due to chronic partial sleep deprivation.

The study author’s assume that there are three potential ways that may link shorter duration of sleep to calcification:

Lauderdale says that this is a small study, and bigger studies need to be conducted to analyze the results. However, evidently in spite of being a small study, it has raised certain eye-catching issues.

Supposedly, there are various health problems that occur due to short sleep duration. The study author’s say that this study does not prove that less sleep is linked to coronary artery disease, however they recommend at least six of hours sleep daily.

Their findings are published in JAMA.