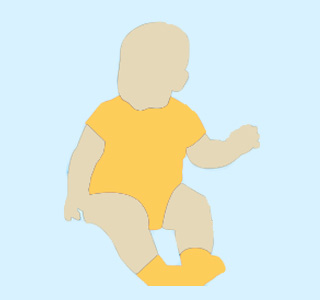 Parents need not fret and doubt their own parenting skills if they often find it difficult to soothe their little bundle of joy. According to a latest study, a child’s temperament may be partly due to a particular gene and a certain pattern of brain activity. This study was conducted by the experts from McMaster University.

These experts were noted to have assessed the interaction between brain activity and DRD4 gene in order to verify if it could act as a predictor of the infant’s temperament. Apparently, earlier studies were believed to have shown that the longer version (or allele) of this gene in children may be associated with a greater risk-seeking behavior, sensory responsiveness, and attention problems.

Here, Louis Schmidt from McMaster University and colleagues were noted to have gauged the brain activity of 9 month old infants through electroencephalography (EEG) recordings. Apparently, when these infants became 2 years old, their mothers were asked to fill a questionnaire based on the child’s behavior. Also, the child’s DNA sample was taken for the purpose of analyzing the DRD4 gene.

It was observed that the children (9 month olds) with the longer version of the DRD4 gene, having greater activity in their left frontal cortex seemed to be easier to calm down at the age of 2 years. These behavioral patterns were quite contrary to those children who had a shorter version of this gene. On the other hand, the children with the long version of this gene, having greater activity in the right frontal cortex seemed to be the most difficult to soothe and also demonstrated more attention problems than the remaining children.

Therefore these findings were believed to have suggested that perhaps the long version of the DRD4 gene may act as a moderator of the temperament of children. Apart from this, it was also stated that there may be other factors which in combination may also play a role in predicting a child’s temperament.