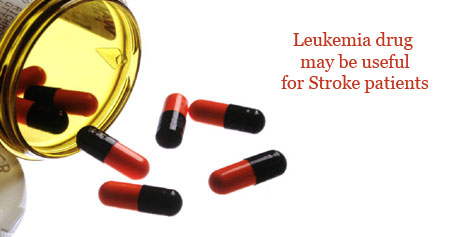 It’s a common occurrence that one drug or therapy proves beneficial to other illnesses as well. The Leukemia drug steps in to prove its benefits not only for Leukemia but also Stroke. A new study has found that a drug used to treat leukemia may be useful to treat stroke patients too.

Researchers from the Ludwig Institute for Cancer Research (LICR) and the University of Michigan Medical School have found that a drug used to treat leukemia, imatinib (Gleevec(r)) when combined with drug tPA, used to treat stroke, showed its benefits by effectively lowering the risk of tPA-associated bleeding in mice.

The tPA has shown its benefits for quite a while with its use in emergency treatment for the most common kind of stroke. But the same tPA can be risky as well as it causes dangerous bleeding in the brain and its brain-saving power fades fast after the third hour of a stroke. The Study showed that the new drug combo reduced the bleeding risk even with tPA being given as late as five hours.

“Together with our clinical colleagues at the Karolinska University Hospital in Stockholm we are now rapidly continuing to explore this exciting possibility in clinical trials involving stroke patients,” study leader Ulf Eriksson of the Karolinska Institute.

The Research team also found positive results in the clinical trials with stroke patients in Sweden. This would surely interest the people dealing in medicine where one drug has multiple benefits thus making it easier for them to treat their patients effectively. The study is published in Nature Medicine.