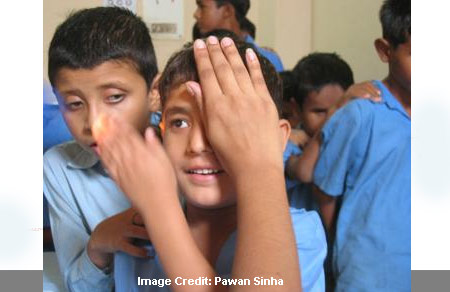 There are some exceptional cases of restored vision among older children and young adults. MIT neuroscientists are trying to find out as to how the brain learns to see.

Apparently cases of restored vision after a lifetime of blindness, though extraordinarily rare, may offer a distinctive occasion to attend to numerous essential questions concerning brain function. It is apparently necessary for the brain to learn to make sense of the visual information. Not much is known about how this learning occurs, but a new study by neuroscientist’s claims that dynamic information i.e. input from moving objects is said to be decisive.

A lot of issues like early mortality, illiteracy and unemployment could be faced by such children. Since it is believed that the brain is not capable of learning to see after age 5 or 6, doctors are apparently hesitant to treat older patients.

Pawan Sinha, who is the MIT brain and cognitive sciences professor, has apparently treated and examined various patients over the past 5 years, through his humanitarian foundation, Project Prakash. This finding from Sinha’s team apparently provides indications about how the brain is taught to put together the visual world. They not only support the thought of treating blindness in older children and adults, but apparently also propose insight into modeling the human visual system, by identifying visual disorders, forming rehabilitation procedures and by supposedly creating computers that can see.

There was a 2007 study in which Sinha and graduate student Yuri Ostrovsky illustrated that a woman who had had her vision restored at age 12 apparently had almost normal visual processing capabilities. These results were said to be vital as they confronted the commonly held concept of a decisive age for attaining vision.

Nevertheless, as they found the woman some 20 years after her vision was restored, the experts apparently had no possibility to examine how her brain first learned to process visual input. The new work supposedly concentrates on about three adolescent and young adult patients in India, and apparently pursues them from the time of treatment to numerous months afterwards. The new study claims that not only is recovery possible, but it also provides insights into the mechanism by which such recovery comes about.

The patients were supposedly examined within weeks of sight restoration. It was discovered that the participants apparently had extremely inadequate capability to differentiate an object from its background, recognize overlapping objects, or even put together various parts of an object. Ultimately, nevertheless, they were apparently better in this ‘visual integration’ task, and found out whole objects and supposedly separated them from their backgrounds.

Ostrovsky, lead author of the new paper, commented, “Somehow our brain is able to solve the problem, and we want to know how it does it or how it learns to do it.”

One of their participants apparently suffered from an unusual condition known as secondary congenital aphakia and was apparently treated with corrective optics in 2004, at the age of 29. Post treatment, the patient took part in a chain of tests, which asked to spot simple shapes and objects. The volunteer could make out some shapes like triangles and squares when they were next to each other, but apparently not when they were placed over each other. His brain was supposedly incapable of distinguishing the outlines of a whole shape. He was of the opinion that every piece of a shape was apparently its own whole. For him and other such patients, it seemed like the world has been broken into many different pieces.

He and the other two patients could much more easily recognize the shapes, if a square or triangle was put into motion. With motion, their success rate apparently increased from about zero to almost 75 percent. Additionally, motility of objects could also considerably influence the patients’ capability to identify them in images. The follow-up tests apparently continued for about 18 months after treatment. The performance of the patients with stationary objects slowly increased to more or less normal.

These findings apparently propose that movement patterns in the world apparently provide some of the most prominent clues about its constituent objects. Sinha is of the opinion that the brain is apparently programmed to use similarity of dynamics to deduce which areas may constitute objects. The team believes that the connotation of motion may go even further. It may provide to ‘bootstrap’ the learning of rules and heuristics by which the brain may be able to parse static images.

Beginning from a preliminary ability of grouping by means of motion, the brain may start to become aware of the similar dynamics that could be associated with similarity in other area attributes like orientation and color. These elements may then be used even in the absence of motion.

In addition to understanding how the human visual system works, the results could assist the experts in building robots with visual systems that could be capable of autonomously noticing objects in their environment.

This finding will be published in the November issue of the Journal of Psychological Science.