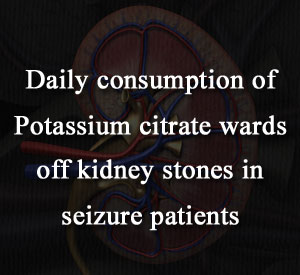 Researchers from Johns Hopkins Children’s Center claimed that children on the high-fat ketogenic diet may be able to control epileptic seizures. Apparently, these epileptic seizures can be controlled only if they take a supplement of potassium citrate on a daily basis as soon as they start the diet.

Allegedly, these seizures aided in preventing painful kidney stones which frequently occurred due to their high-fat ketogenic diet content. Potassium citrate was known to reduce the formation of kidney stones if it was consumed twice daily, either as powder dotted on food or dissolved in water.

Hopkins Children’s were known to have adopted the preventive treatment with potassium citrate since the past two years. Furthermore, doctors were now of the opinion that this one major side-effect may no longer exist and it was now possible to allow numerous children to continue on the diet for an extensive period of time.

“We can confidently say this is a safe and powerful way to prevent kidney stones, and it should become part of standard therapy in all ketogenic dieters, not just those who already show elevated urine calcium levels. If you wait, it might be too late,” says senior investigator Eric Kossoff, M.D., a pediatric neurologist at Hopkins Children’s.

The ketogenic diet seems to have been provided to many children whose seizures are unable to respond to medicines. This was mainly because the ketogenic diet worked by initiating biochemical changes which would remove seizure-triggering short circuits in the brain’s signaling system. However, the diet which contains high-fat foods with very few carbohydrates appears to cause an accumulation of calcium in the urine and the formation of kidney stones in nearly 6 percent of children on the diet.

For the purpose of their analysis, researchers evaluated and treated nearly 301 children suffering from epilepsy with the ketogenic diet at Hopkins Children’s. The findings of the research stated that children who received potassium citrate twice daily seemed to have seven times less chances of developing kidney stones. They were given one 30-milliequivalent packet which was nearly 1,170 milligrams or 0.04 ounces of potassium citrate. Evidently, one out of 106 i.e. 0.9 percent developed a kidney stone in contrast to 13 out of 195 i.e. 6.7 percent who seemed to have been given potassium citrate once they were tested positive for high levels of blood calcium.

However, severe kidney stones could cause extreme pain along with kidney and urinary tract infections, thereby calling for a surgery.

This research will be published in the August issue of Pediatrics.