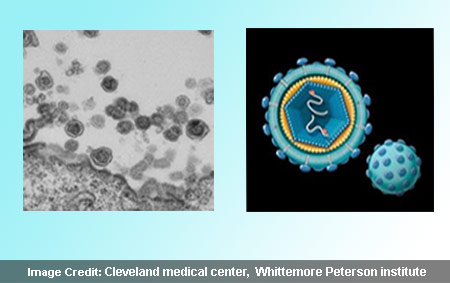 Chronic fatigue syndrome (CFS) is claimed to be an erratically incapacitating disorder or disorders described by constant fatigue unconnected to exertion and not largely relieved by rest. This condition apparently affects millions of people in the United States.

Researchers from the Whittemore Peterson Institute (WPI), situated at the University of Nevada, Reno, the National Cancer Institute (NCI), part of the National Institutes of Health, and the Cleveland Clinic alleged that they have found a possible retroviral connection to CFS.

XMRV has two genomes of RNA for each virus element. White squiggles are said to be RNA molecules and red ovals may stand for the viral enzyme, reverse transcriptase, a protein that apparently imitates the virus RNA genome into DNA.

Judy Mikovits, Ph.D., director of research for WPI and leader of the team that discovered this association, commented, “We now have evidence that a retrovirus named XMRV is frequently present in the blood of patients with CFS. This discovery could be a major step in the discovery of vital treatment options for millions of patients.”

Researchers warned that this finding demonstrates that there seems to be an alliance between XMRV and CFS but does not establish that XMRV causes CFS.

The researchers apparently offer a new theory for a retrovirus link with CFS. The virus, XMRV, was initially recognized by Robert H. Silverman, Ph.D., professor in the Department of Cancer Biology at the Cleveland Clinic Lerner Research Institute.

Silverman, a co-author on the CFS paper, mentioned, “The discovery of XMRV in two major diseases, prostate cancer and now chronic fatigue syndrome, is very exciting. If cause-and-effect is established, there would be a new opportunity for prevention and treatment of these diseases.”

Common attributes of an immune system defect in patients suffering from CFS and prostate cancer guided the researchers to hunt for the virus in their blood samples. In this study, WPI scientists recognized XMRV in the blood of around 68 of 101 CFS patients. In contrast, they discovered that approximately 8 of 218 healthy people had XMRV DNA. The research team not only found that blood cells had XMRV but they also expressed XMRV proteins at high levels and generated infectious viral elements. A clinically confirmed test to identify XMRV antibodies in patients’ plasma is supposedly at present under development.

These outcomes were also apparently maintained by the examination of retrovirus particles in patient samples when they were scanned via transmission electron microscopy. The data supposedly shows the primary direct isolation of infectious XMRV from humans.

Francis Ruscetti, Ph.D., Laboratory of Experimental Immunology, NCI, remarked, “These compelling data allow the development of a hypothesis concerning a cause of this complex and misunderstood disease, since retroviruses are a known cause of neurodegenerative diseases and cancer in man.”

Retroviruses like XMRV have apparently also been exposed to trigger a number of other latent viruses. This could clarify as to why so many diverse viruse