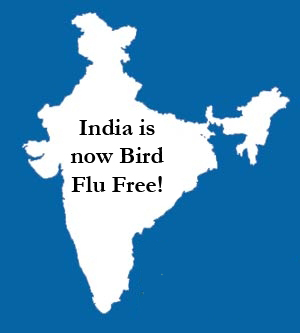 India is finally a bird flu free country. The France-based World Organization of Animal Health (OIE) has informed India’s department of animal husbandry, dairy and fisheries regarding this on November 8, 2007.

Moreover, the OIE, which is an intergovernmental body with 167 countries as members, has also posted the information on its Web site for international acceptance of India’s status.

According to international protocol, the avian influenza-free country status is bestowed upon a nation, if the nation reports no outbreak of bird flu for a stretch of three months from the time it completes disinfection and clean-up of the previous outbreak site.

India, which reported a fresh outbreak of bird flu in a small poultry farm located at Chingmeirong in Manipur’s east district on July 25, 2007, followed the procedure of disinfection and containment, as laid by international standards. By August 10, 3.36 lakh birds had been culled, 28,000 eggs destroyed and 131 metric tonnes of poultry feed burnt.

Surveillance for the deadly H5N1 virus — clinical, virological and serological — was carried out in a 10-km radius of the affected farm. Blood samples of the dead birds from other parts of the country were routinely checked by the HSADL, Bhopal, and NIV, Pune.

“On July 27, we confirmed a fresh outbreak of avian influenza. By August 8, we had completed culling and disinfection operations. On November 8, OIE informed us of our bird flu-free status,” an official was quoted as saying by the Times of India.

The ministry has, in turn, communicated this information to all Indian envoys in countries like UAE, Sri Lanka, Bhutan and Oman, which imposed a ban on poultry products from India following the last outbreak.