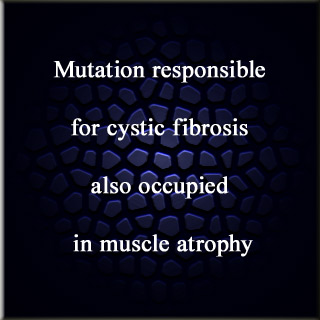 Patients undergoing cystic fibrosis (CF) usually suffer from significant muscle loss. Apparently, this symptom is believed to be a minor complication of this destructive genetic disease.

However, a latest research conducted by Dr. Basil Petrof seems to reverse this equation. According to the research findings, muscle atrophy and weakness may perhaps be the most important symptom which is caused due to the consequences of CFTR gene mutations on the muscle itself.

CF is known to be a genetic disease caused by mutations in the CFTR gene. This gene is believed to be involved in the movement of chloride and other ions across cell membranes. Apparently, its mutation causes a thickening of secretions in the lungs and other organs. However, in the lungs, these thicker secretions are known to clog and block air passages which seem to promote respiratory infections.

Supposedly, cystic fibrosis is known to be caused by a particular mutation on the CFTR gene. Dr. Petrof’s research was the foremost one to have revealed that the CFTR gene also appears to be present in skeletal muscles. This gene was believed to play a role in calcium regulation.

“After analyzing our results, we believe that defects in the CFTR gene are directly involved in the skeletal muscle wasting and weakness seen in many CF patients. And in the specific case of the diaphragm, a muscle required for breathing, this can potentially lead to fatal respiratory failure when the lungs are infected,” elucidates Dr. Petrof.

The findings of the research revealed that lung infection and increased inflammation in the body could be the main triggers. Evidently, they interact with the genetic mutation in order to cause muscle atrophy and weakness in CF mice. It was noted that these result seemed to be relevant to humans too.

Dr. Petrof further continued, “Our study suggests that one way to fight CF-related muscle atrophy is to aggressively control inflammation and infection in our patients. In fact this is what current treatments already try to do; we simply need to reinforce them. In addition, our study suggests that a new way to treat the problem in the future may be to use drugs which can prevent an excess calcium build-up in their muscle cells.”

The latest research findings seem to work in contrast to the traditional belief that muscle atrophy in CF patients is merely the result of lack of exercise or poor nutrient absorption. Presently, it is believed that the primary cause of the muscle loss could in fact be genetic in origin.

Allegedly, this novel evidence that the CFTR gene plays a role in skeletal muscle could perhaps assist researchers in order to develop novel therapies for improving the function of the diaphragm and other muscles in CF patients.

The findings of the research have been published in Public Library of Science – Genetics.