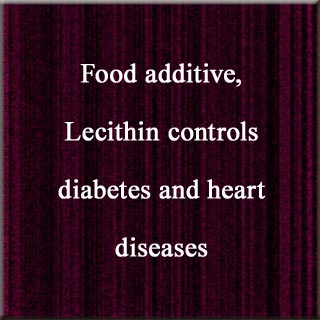 A food additive known as lecithin is generally used in margarine, mayonnaise, chocolate and baked goods. Supposedly, experts have now discovered that lecithin may control diabetes, hypertension and heart diseases.

Scientists at Washington University School of Medicine in St. Louis seem to have recognized a substance in the liver which helps process fat and glucose. Apparently, this substance is a component of lecithin.

Experts claimed that in future lecithin could assist in controlling blood lipids and decrease the chances of diabetes, hypertension and heart disease with the help of treatments brought in food instead of medicines.

The first co-author of the study, Irfan J. Lodhi, Ph.D., a postdoctoral associate in endocrinology and metabolism stated that, “Currently, doctors use drugs called fibrates to treat problems with cholesterol and triglycerides. By identifying this substance that occurs naturally in the body — and also happens to be used as a food additive — it may be possible to improve the treatment of lipid disorders and minimize drug side effects by adding particular varieties of lecithin to food.”

Lecithin is known to be present in high concentrations in egg whites. In addition, it is seen in soybeans, grains, fish, legumes, yeast and peanuts. However, majority of the commercially used lecithin appears to come from soybeans. It was believed that lecithin could change the taste and texture of food.

According to this novel study, a particular type of lecithin, inside the liver seems to bind with a protein called PPAR-alpha. Thereby it permits PPAR-alpha to control fat metabolism.

Earlier, scientists knew that PPAR-alpha appears to be involved in lipid and glucose metabolism. It was believed that when doctors recommend fibrate drugs in order to lessen the triglycerides and increase good cholesterol in the blood, those drugs function by triggering PPAR-alpha.

Senior investigator Clay F. Semenkovich, M.D., the Herbert S. Gasser Professor and chief of the Division of Endocrinology, Metabolism and Lipid Research said that, “That information could be used to make better drugs or even to develop what people sometimes refer to as nutriceuticals — nutrients that have pharmaceutical-like properties.”

Though fibrates were noted to activate the protein, no one in the past seems to have identified any naturally occurring substance which could perform that task. However, the Washington University research team was the only one to have found a link between lecithin and PPAR-alpha.

This study will be published in the journal Cell.