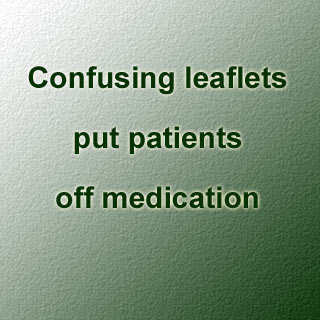 According to a latest study, patients may perhaps discontinue taking their medications if the risks of potential side effects are not clearly explained. At least this is what experts from the University of Leeds have to say.

Supposedly, uncertain medicine leaflets lead patients to overestimate the possibility of side effects by nearly 50 per cent. Also, it could influence their decision about whether to take the prescribed medicine.

Dr Peter Knapp, study author based at the University of Leeds stated that, “These are important findings which will help health workers and pharmaceutical companies explain information to patients in the best possible way.”

Earlier studies have shown that patients may desire for straightforward information about their treatment. Allegedly, they are most likely to read leaflets about their medicine when it is first prescribed to them. Also, the risk of side effects could perhaps have a huge influence on whether they take their medicine. Each patient seems to react in a different way to medicine and till today it has been unclear to explain the risk factors.

For the reason of considering the study in depth, experts questioned approximately 285 visitors to the website CancerHelp. Apparently, CancerHelp is a website of Cancer Research UK where in the patients information is provided.

Dr Kapp elucidated that “Giving information about medication in a confusing way could be dangerous. We need to explain risk in a way patients can relate to. For most people it is better to say ‘three in 10 people will have side effects’ rather than ‘30 per cent’. Percentages are abstract concepts that some people will not understand. The use of percentages means that some people will misinterpret information or ignore it. Both could lead to them making an uninformed decision not to take a medicine.”

“This study confirms what we know from producing content for CancerHelp UK – that you have to make sure you give information to people in a way they will understand it. Most people think side effects from drugs are much more common than they actually are. The study confirms that natural frequency – one in five – is the clearest way to express this type of information so that the majority will understand it clearly,” says Liz Woolf, head of CancerHelp UK.

The findings revealed that people interpreted the risk of having side effects differently. For instance, when percentages were used as like, ‘20 per cent of patients will have side effects’ or when words such as ‘common’, ‘very common’ or ‘uncommon’ were used. However, they seemed to be much more likely to have an accurate understanding of the risks when they were described as ‘one in five people may have side effects’.

The findings of the study have been published in the British Journal of Health Psychology.