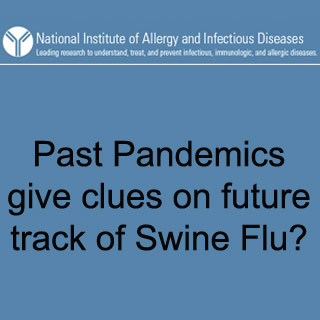 Swine Flu seems to be the most recent cause of concern in most nations. With the rate at which it is affecting thousands across the globe, experts all over are trying to gain a better understanding of this pandemic. Severe influenza pandemics have commonly been believed to be preceded by a milder wave of illness. This was a notion held for long mainly due to certain accounts of the wrecking flu pandemic of 1918-19 that suggested to possibly have followed such a pattern.

However two scientists from the National Institute of Allergy and Infectious Diseases (NIAID), part of the National Institutes of Health, are of the opinion that the existing data are not enough to decisively bring the curtain on whether the 1918-19 pandemic was presaged by a mild so-called spring wave. The experts revealed that whether the responsible virus had become more lethal between the beginning and end of 1918 also cannot be said due to insufficient data.

The scientists namely David M. Morens, M.D., and Jeffery K. Taubenberger, M.D., Ph.D. also examined 14 global or regional influenza epidemics that took place during the past 500 years. These the experts discovered had no consistent pattern of wave-like surges of disease before the major outbreaks. They found that it seemed to have indicated at a great diversity of severity among those pandemics. Also two other flu pandemics of the 20th century those of 1957 and 1968 apparently showed no more than a single seasonal recurrence in general. Over the early years of its circulation in each of the cases, the causative virus did not become significantly more pathogenic.

With the changing track record of past flu pandemics, predicting the future course of the 2009 H1N1 virus seems to be even more difficult. The authors however contest that a few characteristics of the new H1N1 virus like its modest transmission efficiency and the chances that certain people could have a degree of pre-existing immunity offers hope for a more indolent pandemic course. It reveals fewer deaths than in many past pandemics. However flu viruses appear to be notoriously unpredictable and robust pandemic preparedness efforts are crucial.

As the usual influenza season in the Northern Hemisphere comes close, authors urge that the 2009 H1N1 virus should be closely tracked and examined. They conclude, by paraphrasing Danish philosopher Soren Kierkegaard, ‘influenza epidemics are lived forward and understood backward.’ They reveal that ongoing efforts to meet the return of 2009 H1N1 virus with vaccines and other measures are essential to battle out the fickle virus.

Their commentary is published in the Journal of the American Medical Association.