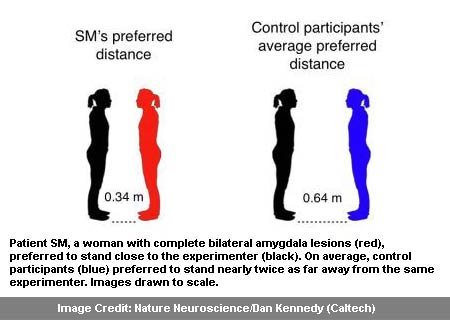 Did you know that our need for personal space may vary with the type of brain structure we have? Here is a latest research conducted at the California Institute of Technology (Caltech) which claims that the latest findings throw new light on the possible connection of neural mechanisms with social behavior. They have identified that the brain structure is apparently accountable for our sense of personal space. This could supposedly provide insight into autism and other disorders where social distance is a problem.

Strong negative emotions such as anger and fear were earlier known to be processed in the amygdala, which is a pair of almond-shaped areas placed in the medial temporal lobes in the brain. It is considered as the seat of emotion in the brain. But nevertheless, it has supposedly never been associated to real-life social interaction.

Researchers claimed to have made this connection with the aid of a unique patient, a 42-year-old woman called as SM, who had extensive injury to the amygdala on both sides of her brain. The research was headed by Ralph Adolphs, Bren Professor of Psychology and Neuroscience and professor of biology and postdoctoral scholar Daniel P. Kennedy.

Kennedy, the lead researcher commented “SM is unique, because she is one of only a handful of individuals in the world with such a clear bilateral lesion of the amygdala, which gives us an opportunity to study the role of the amygdala in humans.”

SM had a problem in apparently identifying fear in the faces of others, or reviewing the trustworthiness of someone, the two consequences of amygdala lesions that Adolphs and his colleagues discovered in earlier researches. Adolphs observed during studying her, that the very outgoing SM is supposedly nearly too friendly on the verge of ‘violating’ what others might identify as their own personal space.

Earlier researches in respect to humans have never exposed an association between the amygdala and personal space. But from their previous understanding of literature, the researchers knew that monkeys with amygdala lesions apparently favored to live in closer proximity to other monkeys and humans than did healthy monkeys.

Intrigued by SM’s bizarre social behavior, the experiment to quantify and compare her sense of personal space with that of healthy volunteers was devised by Adolphs, Kennedy and his colleagues. The short-distance technique experiment was apparently used. For a short time, the participants (SM or one of 20 other volunteers, representing a cross-section of ages, ethnicities, educations and gender) stood a planned distance form the experimenter, then walked towards the experimenter and halted at a point where he felt most comfortable. A digital laser measurer determined the chin-to-chin distance between the subject and the experimenter.

The average preferred distance among the 20 other subjects was .64 meters which is approximately about 2 feet. The favored distance of SM was just about .34 meters which is about a foot. Even though, the other subjects accounted to having feelings of discomfort, SM displayed no sighs of any discomfort. For SM, her favored distance apparently remained unchanged irrespective of who the experimenter was and how well she knew them.

Kennedy explained “Respecting someone’s space is a critical aspect of human social interaction, and something we do automatically and effortlessly. These findings suggest that the amygdala, because it is necessary for the strong feelings of discomfort that help to repel people from one another, plays a central role in this process. They also help to expand our understanding of the role of the amygdala in real-world social interactions.”

The researchers were of the opinion that consciously we do not think of interpersonal distance. But unlike SM, we become deeply aware if our space is violated. Accepted interpersonal distances may vary drastically across cultures. In countries like China or Japan, closer distances between individuals is apparently okay between them than maybe United States. But our preferred personal distance may differ based on the circumstances. We may be willing to approve of less space in a crowded subway than in an office. Kennedy is of the opinion that they way we react in particular situations could be affected by the cultural preferences and experiences that affect our brain over time.

According to Kennedy, these findings may have a significant importance to studies of autism which is a complex neurodevelopmental disorder that apparently affects an individual’s capability to communicate socially and interact with others.

Adding a word of caution, Kennedy remarked that it’s clear that amygdala dysfunction cannot account for all the social impairments in autism, but likely contributes to some of them. He suggests that it is definitely something that needs to be analysed further.

This research was published in the August issue of the journal Nature Neuroscience.