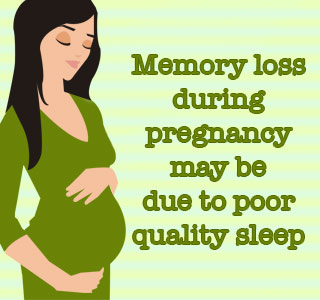 It is not uncommon to hear heavily pregnant women complain about having difficulty in remembering parts of a previously held conversation or recollecting pieces of information that people had given them. Quite often it is suspected that their imagination might be the one to blame. However, now a new study may prove otherwise. So the next time you hear a pregnant women complaining of “placenta brain,” you may want to give her the benefit of the doubt!

In this new study, it was found that women who were in their third trimester of pregnancy did not appear to perform well in auditory memory tests. Their poor performance did not seem to repeat in visual memory and intelligence quotient (IQ) tests. In other words, pregnancy did not seem to affect the visual memory and intelligence quotient of these women. This interesting study was conducted by Australian experts.

They have stated that the reason for this slump in auditory memory may be due to poor-quality sleep, which is associated with pregnancy.

Dr. Lenore Ellett, an obstetrics and gynecology registrar at Mercy Hospital for Women, Melbourne, said that these results need not be a cause of worry as far as a pregnant women’s ability to function well, is concerned. Study experts were reported to have conducted various neuropsychology tests on these pregnant women. The tests revealed that, the IQ results and the visual and physio-spatial memory of the pregnant women appeared to remain unchanged.

Dr. Ellett says that, “You can’t extrapolate that pregnant women can’t drive a car or perform complicated skills or keep a job.”

However, the study experts have stated that the obtained results suggest obstetricians to consider giving information to pregnant women in the written form, instead of informing them verbally. This may further aid in better retention.

It has been stated that the phenomenon of “placenta brain” is mired in controversy. A research conducted by the Australian National University’s Centre for Mental Health Research is said to have yielded contradictory findings. They have stated that pregnancy may not have any effect on the cognitive capacity of an expecting mother.

This study is said to have been designed by Danielle Wilson. Wilson is a sleep scientist and researcher from Melbourne University and Austin Health’s Institute for Breathing and Sleep.

The results of the present study have been presented at the Royal Australian and New Zealand College of Obstetricians and Gynaecologists annual scientific meeting in Auckland.