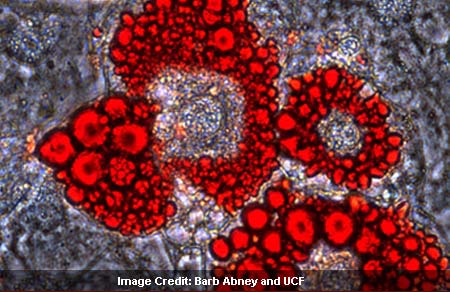 Obesity which can apparently result in severe health impairment and affect an individual’s life can now be controlled to an extent. With increasing health concerns and attempts to control diseases like obesity and associated diseases, a UCF research team has come to recognize a new genetic mechanism that helps in controlling the human body’s fat-building process.

It is believed that this discovery can bring new treatments for obesity and type 2 diabetes. The discovery can supposedly help millions of people and immensely save their money on health care treatments at the same time.

Researches have shown that a specific protein called Peroxisome Proliferator-Activated Receptor gamma controls the fat cells formation and development in the body. But a recent research team led by Pappachan Kolattukudy, director of UCF’s Burnett School of Biomedical Sciences in the College of Medicine, discovered that a gene known as Monocyte Chemotactic Protein-1 Induced Protein (MCPIP) controls specific cells that generate fat in the human body.

People suffering from obesity and associated diseases can be relieved as the UCF findings seem to show a new direction for developing drugs that could benefit more than 300 million people across the world. People who are at a higher risk of suffering from chronic diseases and disabilities it appears can also benefit from it. Considering the present number of obese patients, it is estimated that more than 300 million people will be diagnosed with diabetes by the year 2025.

According to Kolattukudy, MCPIP is potentially an ideal target for drugs that would help in preventing the body from getting resistant to insulin and prone to type 2 diabetes.

“Our research has shown that MCPIP is a regulator of fat cell formation and blood vessel formation that feeds the growing fat tissue,” he stated. “Therefore, a drug that can shut down its function can prevent obesity and the major inflammatory diseases resulting from obesity, including diabetes and cardiovascular diseases.”

MCPIP has been introduced to living cells from mice that had been stripped of the PPAR gamma gene and realized that the cells still completed the developmental process essential to build fat. There will also be efforts to begin and try certain chemical combinations to discover drugs which can be effective for appropriate treatment.

It is assumed that the developmental process of new drugs that can slow down MCPIP formation likely would take several years. The results of recent findings have shown that the increased inflammation of fat cells makes people vulnerable to insulin, which contributes significantly to type 2 diabetes. It is shown that fatty issues contribute to insulin process inability. This process apparently allows glucose or sugars level to flow directly to the bloodstream instead of going into cells.

The findings will be published in the October issue of the Journal of Biological Chemistry.