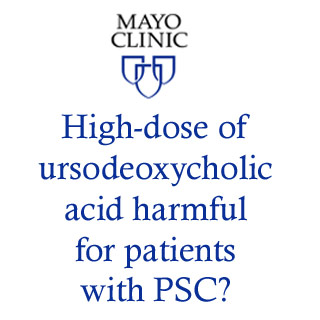 Scientists from Mayo Clinic along with a national team of experts have discovered that a common treatment for primary sclerosing cholangitis seems to be ineffective for patients.

PSC is noted to be a progressive disease which leads to liver damage and ultimately results into liver failure. Liver transplant seems to have been the only known cure for PSC. However transplant is typically reserved for people with severe liver damage.

Apparently, PSC most often affects people in their 30s to 50s and the average age of diagnosis is 40. However, the condition could possibly come up during childhood.

“Primary sclerosing cholangitis is a serious liver disease lacking an effective medical therapy. Some studies have shown that the use of ursodeoxycholic acid, a naturally occurring bile acid, may be a potential solution for patients. Our research, however, showed long-term use of this treatment in high dosages is not suitable for patients,” says lead author, Keith Lindor, M.D., Mayo Clinic gastroenterologist.

In this six-year, multicenter test, approximately 150 patients were noted to have been enrolled in the study in order to determine the effectiveness of ursodeoxycholic acid (UDCA) in treatment of PSC. During the study, nearly seventy-six patients were treated with higher doses i.e. 28 to 30 mg/kg/day of UDCA and about 74 patients were given a placebo.

The study findings revealed that severe undesirable events appear to have been more common in the UDCA group as compared to the placebo group, which prompted scientists to stop the study.

Supposedly, UDCA has been considered to be a potential treatment solution for PSC patients. However, this test signified that the drug used at this higher dose seems to have not been useful.

Dr. Lindor further stated that, “All of us were surprised that the higher doses of UDCA did not help; in fact, the risk of developing even more liver problems increased with the higher dosages. While this was thought to be the best potential treatment for PSC, our study found that not to be the case.”

Dr. Lindor claimed that patients who are presently on higher doses of UDCA should check with their doctors. He was of the opinion that these study findings may perhaps highlight the need for more analysis in order to look into improved treatment options for PSC.

The study findings have been published in the journal Hepatology.