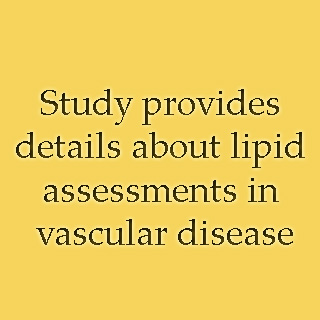 A study claims that lipid evaluations in vascular disease could be simplified by gauging either total and HDL cholesterol levels or apolipoproteins, devoid of any requirement to fast and without regard to triglyceride levels.

Consistent measurement of the relations between chief blood lipids and apolipoproteins with the threat of vascular disease is said to be significant for the expansion of screening and therapeutic strategies. This was mentioned as per the background information.

John Danesh, F.R.C.P., of the Emerging Risk Factors Collaboration Coordinating Centre, University of Cambridge, United Kingdom, and colleagues performed a study to approximate the links of chief lipids and apolipoproteins in connection to coronary heart disease (CHD) and ischemic stroke. The study comprised of information on about 3,02,430 people devoid of any preliminary vascular disease from roughly 68 long-term prospective studies, typically in Europe and North America. During the follow-up periods, it was seen that there were about 8,857 nonfatal myocardial infarctions i.e. heart attacks, around 3,928 CHD deaths, approximately 2,534 ischemic strokes, roughly 513 hemorrhagic strokes and about 2,536 unspecified stokes.

The authors remarked, “First, hazard ratios (HRs) with non-HDL-C and HDL-C were nearly identical to those seen with apo B and apo AI. This finding suggests that current discussions about whether to measure cholesterol levels or apolipoproteins in vascular risk assessment should hinge more on practical considerations (e.g., cost, availability, and standardization of assays) than on major differences in strength of epidemiological associations.”

The authors quoted, “Second, HRs for vascular disease with lipid levels were at least as strong in participants who did not fast as in those who fasted. Third, HRs were similar with non-HDL-C as with directly measured LDL-C. Finally, in contrast with previous findings based on much less data, triglyceride concentration was not independently related with CHD risk after controlling for HDL-C, non-HDL-C, and other standard risk factors, including null findings in women and under nonfasting conditions. Hence, for population-wide assessment of vascular risk, triglyceride measurement provides no additional information about vascular risk given knowledge of HDL-C and total cholesterol levels, although there may be separate reasons to measure triglyceride concentration (e.g., prevention of pancreatitis).”

The authors concluded by mentioning that the current analysis of more than 3,00,000 people has demonstrated that lipid assessment in vascular disease can be simplified by measurement of either cholesterol levels or apolipoproteins without the need to fast and without regard to triglyceride.

The study was published in the JAMA.