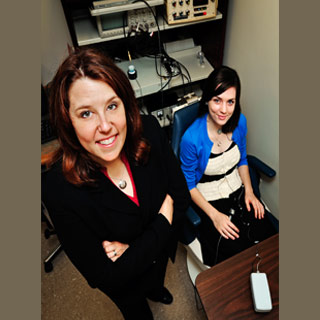 Technology seems to be growing by leaps and bounds every single day. The latest discovery by researchers is that of a new technology that may aid Parkinson’s patients to overcome the penchant of speaking quietly. This is done by playing a recording of ambient sound, which reminds you of the noisy chatter of a restaurant full of customers.

Approximately 1.5 million people in the US are claimed to be affected by Parkinson’s. It is said to be one of the most common degenerative neurological diseases. Voice-related changes are seen in about 89 percent of those affected with Parkinson’s. It is correlated as to how loudly they speak. A speech-related change is seen in about 45 percent of the patients and seems to be related as to how clearly they speak.

Jessica Huber, an associate professor in Purdue’s Department of Speech, Language and Hearing Sciences commented “People with Parkinson’s disease commonly have voice and speech problems. At some point in their disease they will have some form of voice or speech disorder that generally occurs a little later in the disease.

She added, “A major therapy is to get people to speak louder, which also may cause them to articulate more clearly.”

The Lee Silverman voice treatment program is supposedly the most common therapy for Parkinson’s. The patient is coached to speak louder in one-hour sessions, four days a week for a month in this therapy.

Huber remarked “Some Parkinson’s patients do great with this approach, but others do not. They forget to keep speaking louder the minute they have left the therapy room. Lee Silverman tends to work less for people with later stages of disease or those who have some cognitive decline. So I wanted to know whether there was an easier way to cue people during therapy, rather than telling them, ‘Try to be twice as loud,’ or ‘Try to focus on this sound meter and achieve this loudness.”

So a new approach was applied by Huber. When a recording of ‘multitalker babble noise’ was played in the background, the patients were than asked to speak louder. It is basically the sound of a restaurant full of customers but there is no clattering silverware and clinking glasses.

Huber commented “They had an easier time getting louder when I had the noise in the room. Ordinarily, when I asked them to be twice as loud they would say they couldn’t. They couldn’t speak 10 decibels louder, but when I turned on the babble noise, they spoke over 10 decibels louder.”

A well-known phenomenon known as the Lombard effect is elicited by the background sound. In the presence of a background sound, it is a reflex which helps people in automatically speaking louder. Using this theory, Huber created a new electronic theory. When the person starts to speak, the background babble in the voice-activated device is automatically played. Through a earpiece worn by the patient, a sensor on the neck identifies that the person has started to speak and tells the device to play the babble.

For approximately eight weeks, six patients wore the portable system. It was shown by the data that the system apparently effectively prompts Parkinson’s patients to speak louder and more clearly. After eight weeks of training, Huber observed if the system worked by measuring how much louder patients talked while on the device and without the device. The researchers are interested in investigating the physiological changes elicited by the device. To accurately record respiratory, laryngeal and articulatory data, patients wear a mask and sensors in electronic bands that are placed around the rib cage.

The researchers will also test to see how well the system works. For this they will include people who are not speech pathologists. These people will be required to pay attention to the patients pronouncing words that may easily be confused with other words.

Patients at the Rehabilitation Institute of Indianapolis would be the next to be worked with by the researchers. Rurther research is required to see if patients continue to speak louder minus the device. As per Huber, rechargeable batteries may be used if the system is further developed.