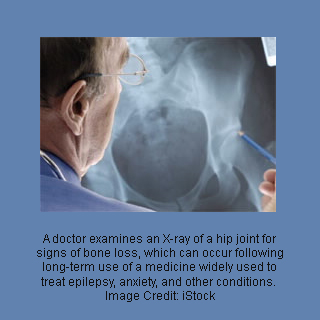 Patients suffering from epilepsy, bipolar disorder or other such conditions may be prescribed a medication known as valproate. This drug may help in treating these ailments but also displays adverse effects. Investigators affirm that long-term usage of valproate can decrease the formation of two proteins crucial for bone strength.

Previously valproate would be recommended for only epilepsy patients. But over the past decades, the medication also seems to be prescribed for mood disorders, migraine headache, and spinal muscular atrophy (SMA) which is a rare genetic disease resulting in loss of muscle control and movement. Most SMA patients often develop weak bones because of the disease as well as the usage of valproate. Though physicians were aware about the bone-loss side effect, they didn’t seem to have any molecular explanation.

For estimating the cause of bone loss, researchers analyzed the effects of valproate on more than 1,000 proteins in the cells of patients with SMA. It was discovered that valproate lowers the production of collagen which is the key protein providing the bone with its strength by approximately 60 percent. Also decreased levels of osteonectin were monitored due to the drug. It is believed that osteonectin binds calcium and aids in maintaining bone mass by 28 percent. The scientists reveal a probable link between molecular mechanism for bone loss and long-term exposure to valproate.

The research is published in ACS’ monthly Journal of Proteome Research.