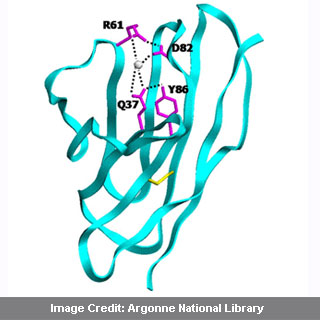 We have known the significance of antibodies in the human body and how this specialized immune protein could help in the fight against infection and its ill effects. Considering such an immense importance of this immunoglobulin, researchers at the U.S. Department of Energy’s Argonne National Laboratory seem to have developed a systematic method to improve the stability of antibodies.

It is believed that this technique may lead to better biosensors, disease therapeutics and diagnostic reagents and non-laboratory applications, including environmental remediation. This recent research revealed that it has now become possible to apparently engineer antibodies for higher stability without compromising their function.

Antibodies are known to be gamma globulin proteins produced by humans and animals, which are used by the immune system to recognize, identify and neutralize bacteria and viruses. These antibodies assist in protecting against infections, and treat some diseases and detect toxins and pathogens.

“The primary issue with antibodies is that they are fragile and short-lived outside of cooler temperature-controlled environments, making their usefulness usually limited to laboratory applications,” explained Argonne senior biophysicist Fred Stevens, the project’s principle investigator.

“Stabilized antibodies, with full functionality, could be used in diagnostic and detection kits that can survive in less than optimal environments and be stockpiled for years at a time,” Stevens stated. “They could be used to combat diseases like cancer. They can also be used as the basis for biosensors that can continuously detect for pathogens like botulinum, ricin and anthrax in places such as airports and subway stations—locations where it is not currently possible to provide ongoing detection of pathogens because antibodies cannot tolerate the environmental conditions.”

These antibodies are produced by a kind of white blood cell known as a plasma cell and made up of four polypeptides of which two are light chains and the other two are heavy chains. These chains are made up of molecules called constant and variable domains. The light and heavy chain each have a variable domain, which join with each other in order to form the antigen binding site. Since the amino acids possess great diversity in the variable domains, different antibodies seem to be capable of interacting with an effectively unlimited number of targets.

“Our work at this detailed level had taught us that antibody stabilization is possible, but we needed to find out if antibodies could be stabilized without compromising their function and do so with moderate experimental investment,” Stevens added.

Recent work suggests these goals are potentially achievable. To proactively improve the stability of a different antibody variable domain, Argonne researchers drew up a short list of 11 candidate amino acid changes. Four of the amino acid changes appeared to improve the antibody stability and when combined together in the original domain, they were noted to provide a 2,000-fold improvement in stability.

One of the pertaining experiments which utilized a functional antibody fragment was seen as capable of enhancing the stability of antibody comparably without compromising on its functionality. Both experiments reportedly accomplished the objective in nearly one month instead of the potentially open-ended time needed for most protein stabilization projects.

“However, still unanswered is whether it is possible to be confident about improving the stability of any antibody generated against a particular target,” Stevens explained. “Our research indicates that stabilization of antibodies is possible. We project that it could be possible to generate the data to guide stabilization of every future antibody in the near future.”

Reportedly, the Argonne’s Office of Technology Transfer is proactively contemplating and seeking participation from industry for licensing and funding further development of this technology.