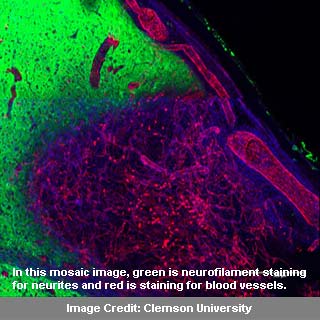 A latest research from the Clemson University claims that a brain tissue may grow at a site of a traumatic brain injury by an injectable biomaterial gel. Ning Zang, assistant professor at the Clemson University, claimed that the research shows the biomaterial gel made up of both synthetic and natural sources, may have a possibility to urge the growth of a patient’s own neural stem cells in the body, structurally mending the brain injury site.

Zhang had apparently established the reconstruction of a complete vascular network at the injury site as a first step towards brain tissue regeneration at the preceding lab researches.

Zhang commented “We have seen an increase in brain injuries due to combat, but our strategy can also potentially be applied to head injuries caused by car accidents, falls and gunshot wounds. These results that we are seeing in adult lab rats are the first of its kind and show a sustained functional recovery in the animal model of TBI (traumatic brain injury). It also represents one of very few in the traumatic brain injury field that attempts structural repair of the lesion cavity using a tissue-engineering approach.”

The present approaches to traumatic brain injury may have been focused on managing primary injury using hypothermia or neuroprotection with pharmacological agents, but all with inadequate success. With this new method, the hydrogel may be injected into the lesion site to direct the response of neural stem cells in the brain to supposedly redevelop normal brain tissue at the lesion site.

These findings were presented by Zhang at the Military Research Forum in Kansas City. The overall health and welfare of the U.S. armed forces, their families, veterans and the American public should apparently be improved as the conference is geared up to achieve this.

In about three years, this procedure might be ready for human testing as per Zhang.