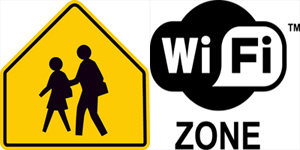 Health authorities have called for an inquiry into the use of wireless Internet networks in schools due to concerns they could be exposing children to the risk of cancer.

This alert came soon after it was revealed that classroom ‘wi-fi’ networks give off thrice as much radiation as a typical mobile phone mast.

In fact, guidelines from Britain’s Health Protection Agency already state that masts should not be sited near schools because of a possible cancer link and other health risks.

Scientists believe children may be more vulnerable to radio-frequency radiation emissions than adults because their skulls are still growing and are thinner.

The World Health Organisation, backed by the Government, says there are ‘no adverse health effects from low-level, long-term exposure’ to wi-fi radiation.

But Sir William said there was growing evidence of possible harm from radio-frequency radiation.

‘There were some indications that there may be cancer inductions. There was some molecular biology changes within the cell.’

The levels of radiation Panorama found were 600 times lower than those deemed dangerous by the Government, which bases its data on radiation safety limits provided by a group of scientists called ICNIRP.

But it does not take the biological effects of radio-frequency radiation into account, basing exposure limits solely on a ‘thermal effect’.

This means radiation only counts if it is so strong it causes a heat effect.

Department of Health spokesman said: ‘Current evidence does not suggest that there is a health problem with wi-fi but we look to the Health Protection Agency to advise Government on these issues.’