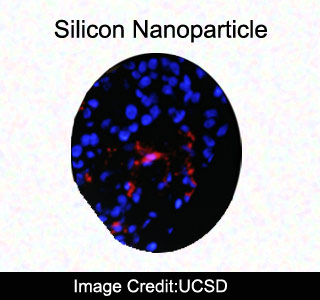 A team of experts have developed the first biodegradable fluorescent nanoparticle that could be used for imaging cancerous tumors in human beings. This revolutionary development was jointly made by Chemistry professor Michael Sailor along with the National Science Foundation supported experts at the University of California, San Diego.

Various experts in the field seemingly believe that the use of nanotechnology in medicine holds potential. Some of its benefits include its economical advantage, enhanced drug usage, lesser drug toxicity, and efficient patient diagnosis.

The present study experts were said to have developed the first nanoscale “quantum dot” particle which has many helpful properties. These include the ability of the particles to glow brightly and aid the physicians in analyzing the internal organs. Apart from this, prior to transforming into non-toxic by-products the particles are stated to emit anti-cancer drugs.

Sailor says that, “There are a lot of nanomaterials that have an ability to do fluorescence imaging. But they’re generally toxic and not appropriate for putting into people.”

The main criterion is that in order to make these materials glow certain toxic chemicals supposedly seem to be needed. Therefore these experts were said to have developed a novel non-toxic quantum dot nanoparticle. This nanoparticle was said to have been made from silicon wafers. These wafers were then, through ultrasound waves, broken into tiny bits thus resulting in tiny silicon particles with nanoscale features.

Sailor says that, “Very high doses of any substance can be harmful. The important conclusion from this work is that the materials are nontoxic at the concentrations we need to use to see tumors.”

It has been stated that an indepth analysis needs to be conducted before this newly developed material may be used in human trials.