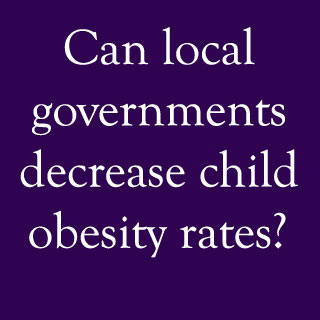 A new report from the Institute of Medicine and National Research Council reveals that local governments can use various strategies to tackle the childhood obesity epidemic in their communities. They can apparently restrict fast-food restaurants near schools and playgrounds, conduct community policing to improve security around public recreational sites, ensure that publicly run after-school programs limit video game and TV time, and impose taxes on high-calorie, low-nutrient foods and drinks.

The report underlines numerous instances where officials have apparently endorsed healthier lifestyles in communities ranging from big cities to small towns. It also advocates preliminary points that may assist the officials to begin childhood obesity prevention plans adapted to their jurisdictions’ resources and needs.

By creating environments that make it either easy or hard for children to eat healthier diets, local governments may play a critical part in the fight against childhood obesity as per the committee of health experts. The overwhelming increase in childhood obesity and the expenses apparently linked with obesity emphasize the necessity for prevention efforts at the community level. The percentage of American adolescents who are obese has apparently increased three times over, increasing from about 5 percent to almost 18 percent, over the past 35 years.

Committee chair Eduardo J. Sanchez, vice president and chief medical officer, Blue Cross and Blue Shield of Texas, commented, “The healthy choice must be the easy choice. Although leisure activities and food consumption are personal matters, local environments influence the choices people make. It’s hard to eat fruit instead of chips or cookies when neighborhood stores carry little fresh produce, or to bike to school on busy roads with no bike lanes. Local officials can make a dent in the obesity epidemic, as demonstrated by the examples we highlighted in this report.”

The report may provide a list of measures that may hold the maximum probability to restrain obesity rates among children. A lot of these steps are centered on increasing the availability for healthy foods and prospects for active play and exercise. Incentives may be offered to entice grocery stores to underserved neighborhoods. Outdoor ads for high-calorie, low-nutrient foods and drinks near schools could be removed.

Calorie and other nutritional information on restaurant menus could be provided. Local programs like ‘Safe Routes to School’ programs may be implemented. Minimum play space and time in child care programs may be regulated. Buses could apparently be rerouted or other transportation strategies may be developed that may ensure people could get to grocery stores. Building codes may be used to make sure services have working water fountains.

About 10 instances of local efforts to endorse healthy eating and physical activity have been cited by the report. They range from a comprehensive obesity prevention initiative which supposedly involves walking trails, a new fitness center, and breastfeeding promotion to a city law that may require calorie information on restaurant menus, to a fitness index that may assist the organizations to observe their growth in meeting dietary and fitness goals. The report has underlined the efforts in Austin, Texas, Baltimore, New Orleans, New York City, Henderson, Texas, Shelby, Mont, Somerville, and in many other places.

The committee apparently acknowledged that each community may be different and local leaders could be in the best place to classify which strategies fit each region’s resources and needs. As a preliminary step, local officials should think of performing a community assessment to establish such factors.

The study was sponsored by the Robert Wood Johnson Foundation and Centers for Disease Control and Prevention.