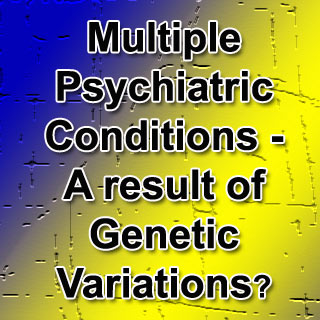 A lot of grave psychiatric conditions are apparently caused due to genetic variations in our body. Similar submicroscopic variations and rearrangements emerge in the genetic material of individuals with schizophrenia, autism and mental retardation, claiming that the three disorders may share a developmental pathway.

New technologies to compare genomes have supposedly allowed researchers to identify genetic alterations called as copy number variations i.e. deletions or duplications. These may alter the amount of copies of particular DNA segments, as per the background information.

The authors commented, “Recently, this approach has been widely used in neurologic and psychiatric disorders, including mental retardation, autism spectrum disorders and schizophrenia. Findings from these studies suggested that several genes involved in similar neurodevelopmental pathways may be associated with these conditions. However, so far only rare structural variants, sometimes present in a single case, have been identified.”

The genetic material were examined from approximately 247 individuals with mental retardation, 260 with autism spectrum disorders, 236 with schizophrenia and 236 controls with no psychiatric diagnosis by Audrey Guilmatre, Ph.D., of Institut Hospitalo-Universitaire de Recherche Biomédicale, Rouen, France, and colleagues.They focused on 28 candidate loci that were apparently found to be linked with these conditions in earlier researches.

Only one copy number variation correlated to autism spectrum disorders was potentially discovered to be more particularly linked with one condition as compared to all three. Additionally, several individuals with a copy number variation supposedly had more than one disorder; about one-third of those with schizophrenia and 83.3 percent of those with autism apparently also had a level of cognitive functioning placing them in the range of mental retardation.

This research confirms and extends recent evidence suggesting that many candidate copy number variations are not disease specific but are involved in the expression of different behavioral phenotypes, including mental retardation, autism spectrum disorders and schizophrenia. This implies the existence of shared biologic pathways in these three neurodevelopmental conditions.

The authors conclude by mentioning that these pathways seem to affect the configuration and preservation of the synapses or gaps between nerve cells, as well as the purpose of definite neurotransmitters. The dysfunction of specific neuronal networks underlying the particular symptoms of each clinical condition, the experts share most likely depend on additional genetics, epigenetics and environmental factors that remain to be characterized.

This research was published in the September issue of Archives of General Psychiatry, one of the JAMA/Archives journals.