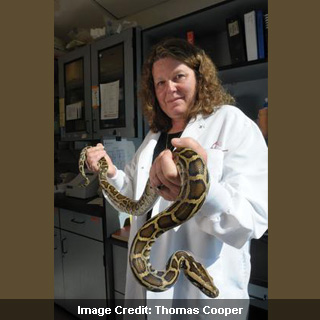 How can something as dangerous as python be of any use to human beings? In a surprising research by scientists from the University of Colorado Boulder, it has been unfolded that high levels of fatty acids circulating in the bloodstream of pythons may support healthy heart growth in humans.

The team found that one day after Burmese pythons had a sumptuous meal, the amount of triglycerides in their blood apparently elevated by more than 50 folds. In spite of such huge proportions of fatty acids present in the blood, there were no fat deposits found in the heart of the python. They also noticed the acceleration of an essential enzyme that shields the heart from impairment.

After spotting the chemical constitution of blood plasma in fed pythons, the investigators administered ‘fed python’ blood plasma or a reformed fatty acid mixture into fasting pythons. In both these instances, the pythons apparently showed elevated heart growth and heart health. The results were replicated in a set of mice too.

“Well-conditioned athletes like Olympic swimmer Michael Phelps and cyclist Lance Armstrong have huge hearts. But there are many people who are unable to exercise because of existing heart disease, so it would be nice to develop some kind of a treatment to promote the beneficial growth of heart cells,” cited Leslie Leinwand, a professor in the molecular, cellular and developmental biology department and chief scientific officer of CU’s Biofrontiers Institute.

In the mouse trial, the animals were linked to mini-pumps that injected low doses of the fatty acid mixture for a span of 1 week. As a consequence, the mice seemed to show substantial growth in the principal portion of the heart that pumps blood and their heart muscle size also increased. Notably, there appeared to be no rise in heart fibrosis which leads to stiffness of heart muscles and may be an indicator of disease. Also, there were no changes observed in the liver and in the skeletal muscles.

The three major fatty acids uncovered in this analysis were myristic acid, palmitic acid and palmitoleic acid. Moreover, the enzyme that exhibited increased activity in the heart of pythons during feeding phases is called superoxide dismutase which is a well known cardio-protective enzyme found in many creatures and humans too.

The report is published in the journal, Science.